“Not enough progress has been made in closing the gender gap, and in fact, in some countries, you have seen gender inequality increasing…” – Ángel Gurría, secretary-general of the Organization for Economic Cooperation and Development (OECD).

This was the opening of a recent speech at #WomenRule by Politico on a paper newly published by S&P Global.  Unfortunately, one of those countries is the United States as evidenced by  the decline of women’s participation to just 57%, from roughly 60% in 2000, according to the Bureau of Labor Statistics.  Also, as stated by the OECD, as recently as 1990, labor force participation rate (LFPR) among prime-age American women was near the top of advanced economies in the OECD. In 1990, LFPR for women of prime working age in the U.S. reached 74%. Since then, that rate has stayed roughly stable while increasing steadily elsewhere, pushing the U.S. down to 20th place among 22 advanced OECD economies by 2016.

In a prior paper by S&P Global, there was an economic scenario that showed the potential to add 5%-10% to nominal GDP.  If women entered, and stayed, in the workforce at a pace in line with, say, Norway, the U.S. economy would be $1.6 trillion larger than it is today.  However, the U.S. women’s LFPR has fallen from a key reason that the U.S. is the only country in the OECD that doesn’t provide income support during maternity or parental leave by law.  As one possible solution, S&P Global suggests a Congressional Budget Office (CBO)-like “score” could assess the impact legislation would have on the economic feasibility and accessibility to the workforce for women.

If the U.S. were to increase women’s LFPR to that of other advanced countries, S&P Global Ratings estimates an addition $455 billion output could be added to its baseline forecast for growth, or alternatively could add 0.2 percentage point per year on average for the next ten years.  That additional U.S. GDP growth could propel not just the U.S. stock market but the global markets as well, potentially adding an extra $2.87 trillion to the S&P 500 market value and $5.87 trillion to the S&P Global Broad Market Index over the next decade.

U.S. GDP growth impacts not just the U.S. stock market, but markets globally since the U.S. economy is largely driven by consumer spending.  Generally, the more a country exports as a percentage of its output to the U.S., the greater the stock market sensitivity is to the U.S. growth. The mechanism for this is fairly simple: Because the U.S.’s “trade elasticity” is such that the country’s imports tend to increase at a faster pace than GDP growth during expansionary periods (while shrinking at closer to a 1-to-1 rate during times of economic contraction), manufacturers and other exporters to the U.S. enjoy outsized benefits when the American economy expands.

Further evidence that this dynamic is at least partly responsible for the disparity includes the fact that South Korea—the U.S.’s sixth-biggest trade partner and No. 11 on the list of national economies—sends just about a third more to the U.S. than it receives, but those goods and services make up a substantial 4.6% of Korea’s GDP.  This has driven its stock market total return up 9.3% on average per 1% of U.S. GDP growth historically.

Most notably from its sensitivity to U.S. growth, Korea, which currently has the smallest market value of the major countries in the S&P Global Broad Market Index, could benefit so extraordinarily from U.S. GDP enhanced by increased female LFPR that it would jump to No. 3, just behind Japan and the U.S. in the 10 years examined, surpassing China. 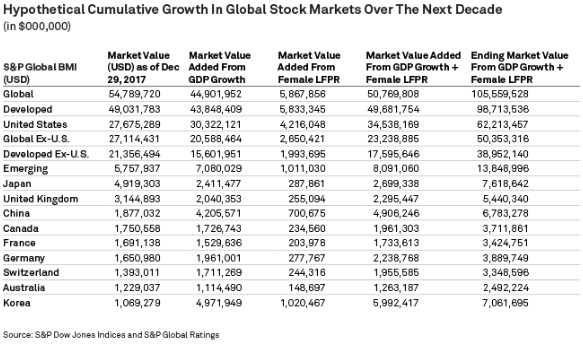 As this bull market, the second oldest one on record, continues to age, perhaps women are the key to unlocking the growth to give it a longer life.