Every year, Trucost and GreenBiz Group release their annual State of Green Business report, which gives an overview on the state of the sustainability movement and reviews 30 key indicators assessing corporate sustainability performance. As noted by Richard Mattison, CEO of Trucost, in a blog from earlier this month, the carbon emissions of the largest global companies have decreased in absolute terms and are at the lowest level in the past five years due to increased use of cleaner fuels. In this blog, we analyze the carbon emissions for the S&P 500 companies to gain insight about the index’s carbon emission history and understand which sectors are driving this downward shift.

Emissions are typically measured by mass of carbon dioxide equivalent (CO2e), whereby the “equivalent” is a proxy applied to greenhouse gases other than carbon dioxide and reflects their relative environmental impact. The units of reference are in kilotons of CO2e.[1] Exhibit 1 shows the total direct emissions (operational and first-tier supply chain greenhouse gas emissions) for the S&P 500 on an annual basis from December 2009 through December 2017, and 2017 (in yellow) comes in as the lowest absolute emissions figure in the nine-year period for which historical data is available. 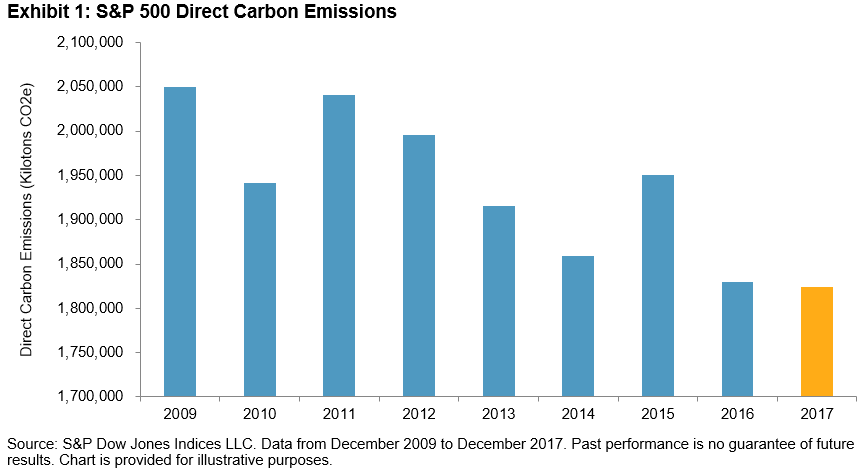 In terms of sectoral contributions, the utilities and energy sectors have consistently represented the top two sectors generating the largest amount of greenhouse gas emissions, with utilities contributing 50% and energy approximately 20%, totaling to 70% for 2017. This amount represents an improvement from 2009 when these two sectors combined represented 83% of carbon emissions (see Exhibits 2 and 3). 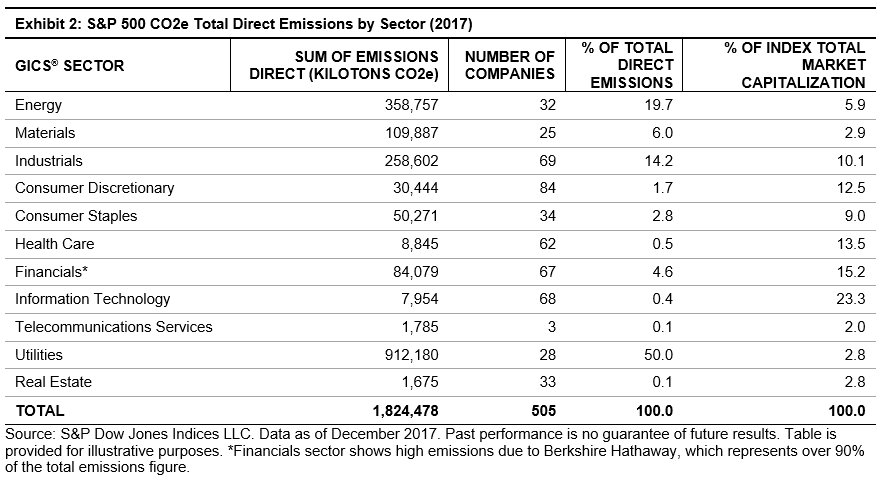 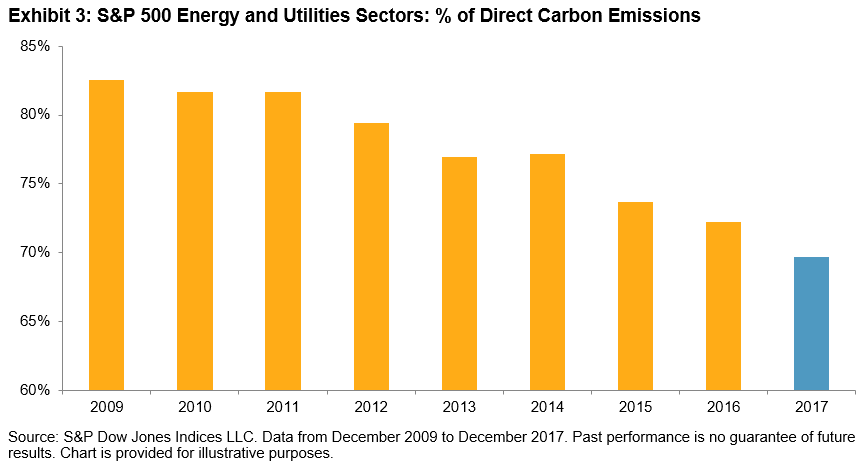 Exhibit 4 compares the percent change from 2009 to 2017 for the S&P 500 and its GICS sectors for direct carbon emissions. Carbon emissions fell 11% for the overall index in the past eight years, with the highest emitting sector (utilities) decreasing its total direct emissions by 29%. The energy sector has also shown an emissions drop of 13% in the same time frame.

Analyzing the carbon emissions change data highlights sectors that show the greatest improvement and interestingly enough, the greatest reductions stem from the highest emitting sectors. As we mentioned in the previous “Evolution of Carbon Awareness Investing” blog, previous iterations for index construction had incorporated exclusionary screening, whereby the highest carbon emission offenders, whether on an absolute basis or a sector-neutral method, are excluded. However, as shown by the carbon momentum data in Exhibit 4, if the intent is to motivate carbon reductions, then the exclusionary option may not be the best choice and employing carbon momentum data may be more viable as it rewards companies that are working to reduce emissions.

The shift to renewables and cleaner technology is taking place, albeit at a slower pace than what is needed to meet the 2 degree targets as stipulated in the Paris Agreement. For institutional asset owners who can meaningfully influence a corporation’s behavior, one way to speed up carbon emissions improvement and percent change may be to consider redirecting capital to those companies that exhibit positive carbon momentum.

[1]   Emissions data is sourced from Trucost, which provides data on both direct and first-tier indirect emissions on a company-by-company basis; if companies do not report or otherwise make such figures available, Trucost estimates the emissions of each company using a proprietary model. Direct emissions, as the name suggests, encompasses emissions of CO2e produced directly by the entity, whereas indirect emissions are those that arise from the entity’s suppliers of materials and equipment, utilities such as electricity and business travel. The inclusion of indirect emissions is not always preferable, especially in an index, as this may result in double counting. For example, if a utility company as well as one of its customers is included in the same index, the emissions of the latter would be counted twice.