In October 2017, nearly USD 10 billion of green bonds were issued, bringing the total to USD 94 billion YTD (see Exhibit 1).  The pace was slower than the record USD 15 billion of issuance seen in September 2017; however, if history repeats itself, November 2017 may give us another record month.  Germany led the pack in October, accounting for 32% (USD 3 billion) of the issuance, followed by China with 22.5% (USD 2.1 billion). 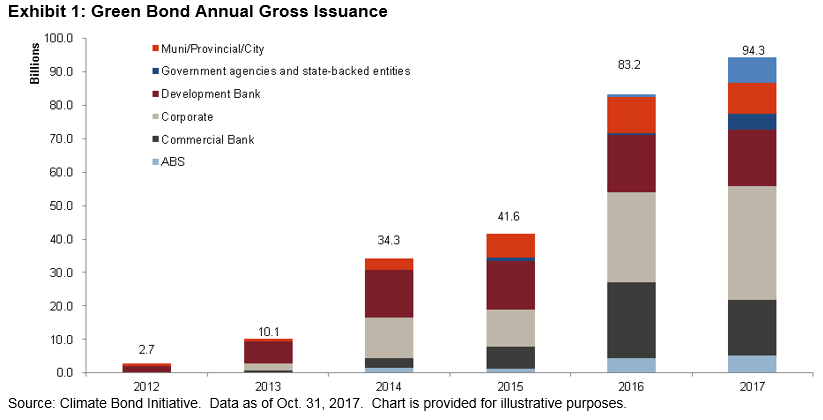 Issuance of green bonds in China has primarily come from commercial banks amid the government’s increased focus on and prioritization of the environmental concerns.  Despite being a latecomer to the green bond market, China is the third-largest issuer, following supranational entities and U.S.-domiciled entities.  After the debut issuance by the Agricultural Bank of China in October of 2015, the country accounts for 14.1% of the green bond market.  After the drastic measures recently taken by the government in shuttering factories, project-based issuance may become a vital lifeline to many companies in affected regions.