Earlier this week, the Wall Street Journal featured a long article arguing that Morningstar’s star ratings for mutual funds were a “mirage.”   Since these ratings exert a powerful influence over fund flows, their usefulness is obviously of keen interest to investors.  To its credit, Morningstar, although arguing that its ratings are a “worthwhile starting point,” acknowledges that they are backward-looking and were not designed to be a predictive model of future performance.  Morningstar’s own analysis argues that the ratings are most powerful when used to select allocation or taxable-bond funds, while they “exhibit less predictive power” for U.S. equities.

This will not surprise anyone who has even a nodding acquaintance with our Persistence Scorecards.  A companion to our better-known SPIVA reports, our Persistence analysis asks whether managers’ historical success predicts their future results.  Looking back ten years, e.g., we can ask whether top quartile managers in the first five years repeated their performance in the second five years.  As the table below shows, they typically don’t:

Ironically in view of this week’s controversy, a valuable perspective on the same phenomenon comes from a 2010 Morningstar study.  The study examined the predictive power of star ratings and expense ratios, and noted that “If there’s anything in the whole world of mutual funds that you can take to the bank, it’s that expense ratios help you make a better decision….In every asset class over every time period, the cheapest quintile produced higher total returns than the most expensive quintile.”  If low expense ratios are predictive of returns, it follows that “you get what you pay for” is wrong, at least in a general sense.  If you got what you paid for, high-expense ratio funds would outperform low-expense ratio funds.  If you don’t, that’s a powerful argument in favor of the kind of mean reversion we persistently see in our Persistence Scorecards.

Given the burden of empirical evidence, one is left to wonder why investors continue to include past performance as a factor in their decision making.  I suspect that it’s deeply and fundamentally behavioral – we human beings are conditioned to believe that the past predicts the future.  And in much of life, the past is a useful guide.  Because investment management is an exception, not the rule, confusion about the importance of historical performance is likely to continue.

The ever-changing environment of business has led to significant changes in the index world.  As with any market, consumers or market participants require more options in order to operate in such a fast-paced environment.  For many years, Canadians have relied on a singular index provider to represent their market.  As the pressures of the current business environment require cost controls, additional service demands, or regulatory review, the need for additional service and provider options increases.

Exhibit 1 shows a structural and return comparison between the two index providers of comparable bond universes.

The decision to claim social security benefits is not as straightforward as it seems and involves a number of key considerations.  Given that it is a one-time decision and locks in one’s benefits permanently, aside from periodic cost of living adjustments, it is important for retirees to rethink whether there is an optimal timing and strategy for claiming Social Security benefits.

Collecting Social Security benefits early results in a benefit reduction of 6.67% per year for up to 36 months before full retirement age, and a rate of 5% per year beyond that.  Conversely, choosing to delay benefits after full retirement age has the effect of an 8% increase per year, and this delayed retirement credit can accumulate until age 70.  Beyond age 70, no more credits are granted.

The Social Security Administration does not advocate any particular age on the timing of the claiming of the benefits.  However, it does publish the benefit claiming data in its Annual Statistical Supplements report.  The Center for Retirement Research at Boston College analyzed the data for the 2013 claim year.[1]  The results are presented in Exhibit 2.

While there is no one-size-fits-all  single timing strategy, retirees who are considering claiming Social Security benefits should consider the following key factors to weigh any tradeoffs.  The relevant factors to consider are:

[2]   The Full Retirement Age (FRA) increased by two months for workers who turned 65 in 2003 and continued to rise at this pace each year until reaching 66. As a result of the shift in the FRA, Table 6.B5 in the Annual Statistical Supplement 2014, Social Security Administration, reports distributions from age 65 to the FRA and at the FRA. Exhibit 2 combines these two claiming groups into one group: FRA (65-66).

In addition to the higher yields, Asian market participants could also benefit from the market transparency and ease of trading, as most of the U.S. preferred stocks are listed and tradable on exchanges. Fundamentally, a preferred stock is a hybrid security that has characteristics of stocks and bonds.  Preferred stocks pay dividends at a specified rate and receive preference over common stocks in terms of dividend payments and liquidation of assets. 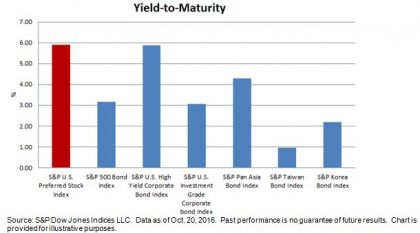 Keen watchers of the ever-developing exchange-traded product space may have noticed an intriguing development last week, as the first purely “artificial intelligence”-based stock-picking ETF launched.  Powered by IBM’s “Watson” platform, the fund sponsors claim to use a proprietary quantitative model to select stocks that will outperform, based on machine learning applied to vast data sets.

One cannot help wondering if they have missed a trick: as far as I can tell, their algorithm does not explicitly allow for the possibility that – rather than trying to pick stocks – a truly intelligent option might be to invest  their entire portfolio in a low cost index fund, or otherwise replicate the market portfolio.  Certainly, buying such funds is nowadays as easy as buying stocks, while the data would suggest that this is more than a viable option.

Perhaps, one day, another sponsor will create a fund including this option.  Perhaps, one day, our machines will be so advanced that they can draw conclusions from the entire range of academic and practitioner studies that examine the performance of stock-picking compared to low-cost passive investing.  Perhaps, if it helps, they can check their conclusions 10,000 times a second.

Such a fund may never exist, but if it one day does, I hope they call it “Holmes”.