The S&P Canada Aggregate Bond Index offers an investable way to participate in a broad index that is designed to measure the performance of the Canadian market.  The index is made up of the following fixed income product groups (see Exhibit 1). 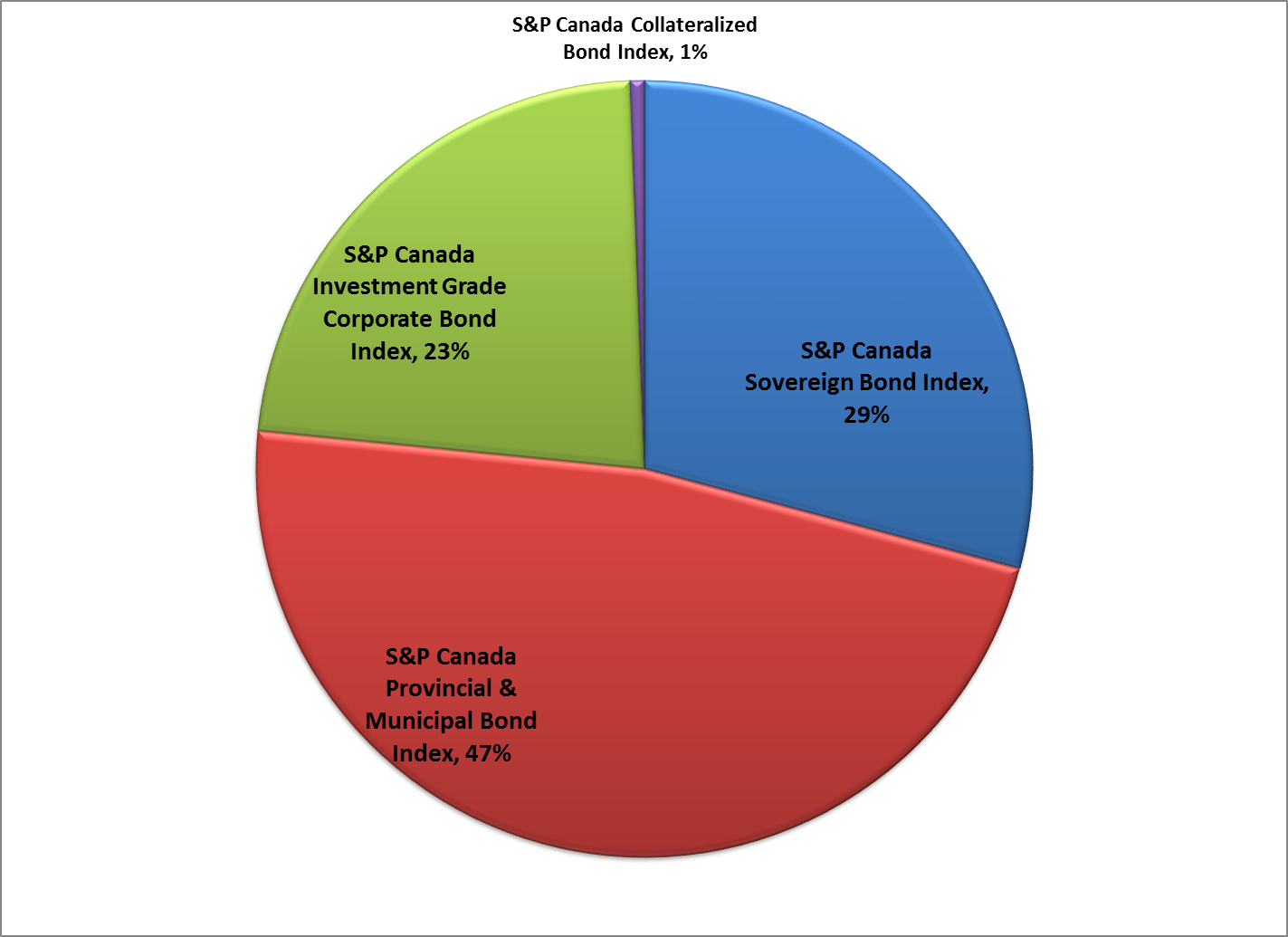 Diving deeper into the makeup of the index, the 47% weight held by provincials & municipals consists of issuers such as the ones displayed in Exhibit 3.

The S&P Canada Investment Grade Corporate Bond Index contains 607 bonds and has a yield-to-worst of 2.2%.  It is an investment-grade index, with 40% of its bonds residing in the ‘BBB’ rated category from a conservative ratings approach that takes the lowest of Standard & Poor’s Ratings Services, Moody’s, and Fitch.  As a reflection of the Canadian market, the financials sector holds 63% weight in the index.

The collateralized sector of the market accounts for a small percentage of the index, less than 1%.  The S&P Canada Collateralized Bond Index contains 15 bonds with a market value of CAD 10 billion that meet the qualifications.

As of June 10, 2016, there is USD 10.6 trillion in negative yielding assets throughout the world—that’s more than 15% of global GDP. The increase in assets with sub-zero yields is evident when looking at the S&P Global Developed Sovereign Bond Index. On a market value basis, sovereign bonds with negative yields now account for 51% of the index (up from 27% at year-end 2015).

There are a number of global factors that contribute to negative bond yields, however it’s worth clarifying that there is a difference between negative yields and negative rates. Central banks set policy rates to control economic growth, and economies require low levels of inflation to grow.  Central banks attempt to ensure adequate inflation while protecting against high inflationary conditions and avoiding deflationary conditions.  As such, the Bank of Japan first cut its benchmark interest rate below zero to -0.1% in January 2016.  The rate cut was an attempt to counteract the effect of falling oil prices and to help achieve its target inflation goal of 2%.  In November, central banks in Europe imposed negative rates on commercial banks in an effort to encourage banks to lend and prompt businesses and savers to spend and invest.  Furthermore, Sweden’s policy rate is currently -0.5%, and Switzerland cut its rate to -0.75%.

Alternatively, many yields on sovereign debt have turned negative due to a concern over a lack of economic growth. Yields have turned negative in Belgium, Denmark, Finland, France, Germany, Ireland, Italy, Sweden, and Switzerland.  Since the financial crisis, sub-zero yields have occurred sporadically, however they have typically appeared during times of market stress and predominantly in short-dated, highly liquid assets.  It seems that this is no longer the case, as negative yields have now spread to intermediate maturities throughout European and Japanese sovereign bonds.  The current yield on a 20-year Swiss government bond is -0.08%.

The negative yield environment is reflective of a principal preservation mentality, in which market participants are more concerned with “return of capital” than “return on capital.” However, it’s worth noting that current yields assume that bonds will be held to maturity; some market participants may believe they will be able to sell the bonds for more than they paid (i.e., yields will fall even more).

The municipal bond market is a huge and diverse segment of the bond markets.  Part of the ‘lore’ of the muni bond market has been that the summer months of the year create a natural increase in demand for municipal bonds.  It turns out there is a basis behind this ‘lore’.

Using the broadest municipal bond index at S&P (and I believe in the muni market place), the S&P Municipal Bond Index and examining the concentration of debt maturing in each month gives us a  visual of a ‘lunar’ like affect on the municipal bond market.

Some statistics describing the characteristics of the S&P Municipal Bond Index (as of June 10, 2016):

A key to understanding the impact of such a cycle is determining how much of that coupon and maturing bond cash flow is reinvested in the municipal bond market and how much is used to generate an income stream for it’s bondholders.

Another perspective is how much debt is retiring or maturing each year in the next few years.  Other bond markets, like the high yield corporate and senior loan markets often have high concentrations of debt maturing in specific years in the near future – often referred to as a ‘maturity cliff’.

Chart 1: Select indices and their yields (Yield to Worst):

The S&P Indonesia Bond Index tracks the performance of local currency denominated government and corporate bonds from Indonesia and with a total market value of IDR 1,511 trillion. The robust gain was boosted by the strong performance of sovereign bonds; the S&P Indonesia Sovereign Bond Index rose 10.78% in the same period. The index’s yield-to-maturity tightened 115 bps YTD to 7.73% , after reaching a 13-month low at 7.40% in mid-April 2016.

The S&P Indonesia Corporate Bond Index gained 7.36% YTD, while its yield-to-maturity tightened 125 bps to 9.07%. Across sector-level indices, the S&P Indonesia Utilities Bond Index outperformed the other sector indices and advanced 8.32%.

Standard & Poor’s Ratings Services recently revised its outlook on the long-term sovereign credit ratings on the Republic of Indonesia to ‘positive’ from ‘stable,’ while affirming the ‘BB+’ long-term and ‘B’ short-term sovereign credit ratings. The market expects more investors to access the Indonesian market if the speculation of rating upgrade becomes materialized, particularly for those who have not been holding Indonesia bonds for rating reasons.