In yesterday’s note (on Jan. 11, 2016 that used closing data as of Jan. 8, 2016), I stated that the oil market is falling at an alarming rate, and I guess I was right. That is the reason I’m posting an update today. Normally, I don’t update the posts from day to day; however, today, something I said yesterday changed very quickly:

“The concern is for futures investors that need to pay rolling costs.  The S&P GSCI Crude Oil Excess Return that includes rolling costs is down far past a 2004 low, reaching its lowest since Feb 1999, and is on the verge of another multi-year loss. If the S&P GSCI Excess Return loses just another 5.5%, it will shed another 5 years of gains.”

After a 2-day loss of 8.2% in the S&P GSCI Excess Return index, that Feb 1999 bottom is history… Now the index blew through the 1999 bottom, and intraday broke the 1994 bottom to set the index all the way back to the lowest level seen since March of 1989. That is a 27 year low. During the day, the index recovered but is now flirting with and is only 55 basis points away from that 1989 level.

The index only goes back to 1987 and here is the new picture: 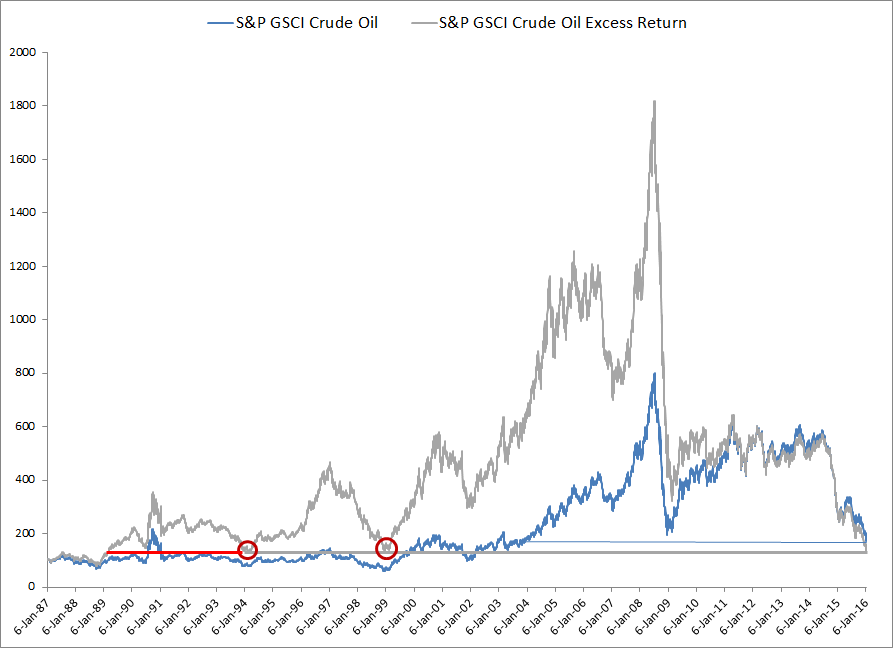 Someone today asked whether this is a good thing for the rebalance that is increasing the (WTI) crude oil weight not just 3.4% from the relative loss (to other commodities) but an additional 2.1% from the new world production weights for 2016.  It depends how you look at it. Maybe like catching two falling knives or getting the steal of a lifetime…

If this drop is like the 2008-9 drawdown then oil needs to fall to about $27; however, with the supply like the 80’s and the Chinese demand slowdown like the global financial crisis combined, this period may be worse.

Tagged:
commodities, jodie gunzberg, oil, S&P GSCI
The posts on this blog are opinions, not advice. Please read our disclaimers.