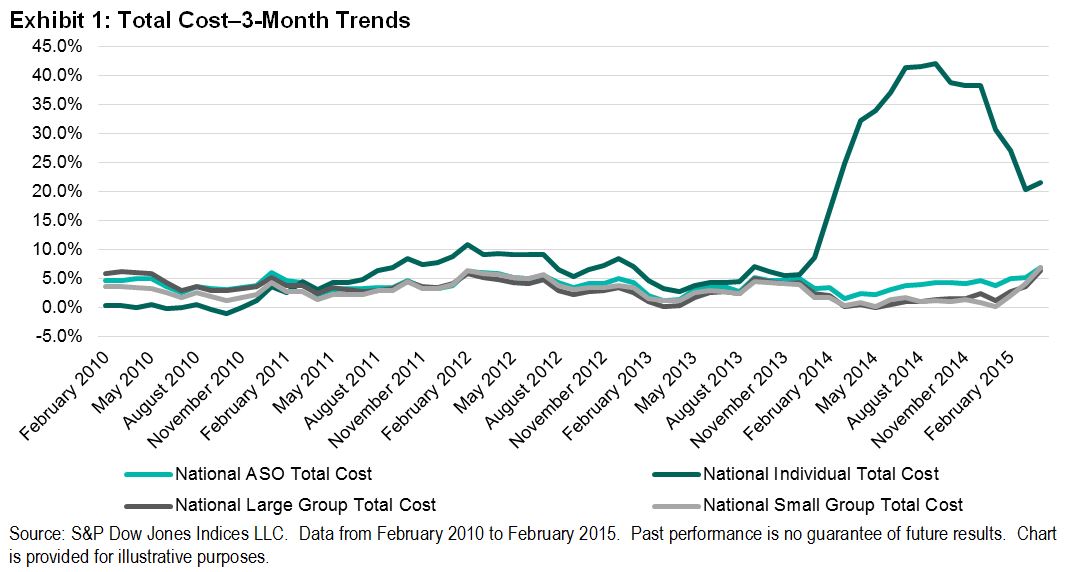 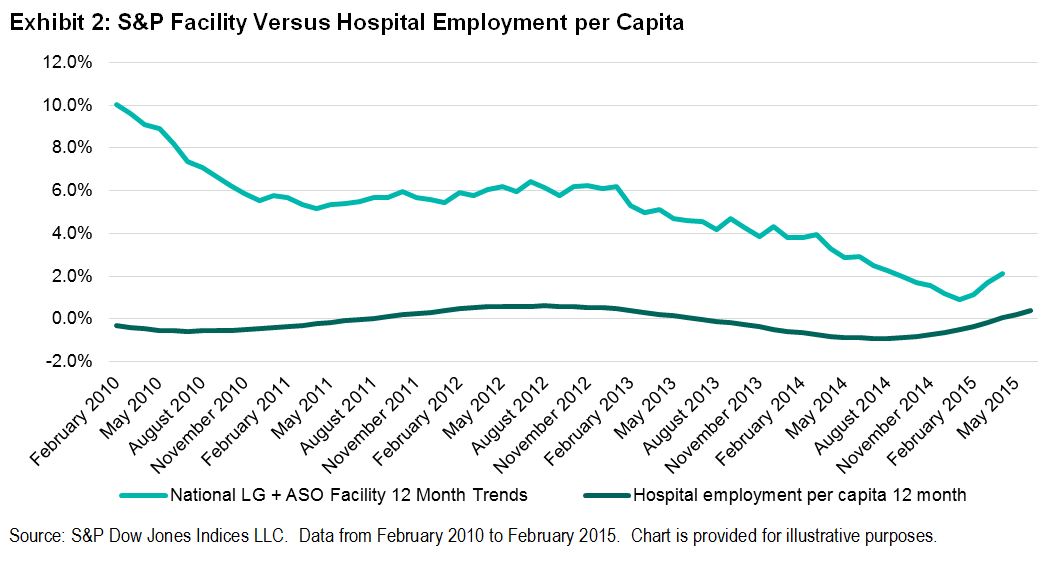 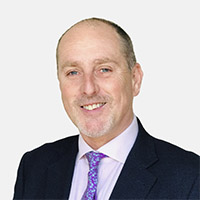 Roger McNamee, the American businessman and sometime musician said “We need to stop thinking about infrastructure as an economic stimulant… [since] economic stimulants produce Bridges to Nowhere. Strategic investment in infrastructure produces a foundation for long-term growth.” In 2013, Transportation for America identified that one in nine U.S. bridges—a jaw-dropping 66,000 of them—are deficient, and they are a striking example of the USD 1 trillion per year global infrastructure spending gap identified by the World Economic Forum last year.

If—as McNamee trumpets—infrastructure investment promotes growth, owners of large pools of capital should, by design, be interested. Global pension assets are one such reservoir, totaling around USD 40 trillion and predicted to increase to USD 65 trillion1 by 2020, yet less than 1% of aggregate pension assets are invested in infrastructure, and those funds that are sold on the investment benefits are finding a persistent gap between actual investment (2.9%) and their target allocations (3%-5%).2 The asset class is attractive to institutional investors looking for growth and inflation hedging, with investment return expectations for “Core” and “Core Plus”—investments in societal staples such as bridges, rail, roads, and airports—near 7%-13% per year.3

So why is the channel between spending requirements and return seekers seemingly unbridged? Three possibilities exist. First, the availability of suitable investment opportunities seems limited, as characterized by unallocated investment capital, which is at a record level of USD 100 billion.4 Second, the median pension fund infrastructure investor size is USD 6 billion,5 pointing to expertise and governance requirements many funds consider beyond their scope. Third, in a pensions management world where there is persistent and relentless focus on cost, specialized infrastructure manager fees of 2% and 10% of excess return over 8%6 are out of kilter. Infrastructure returns—in this context—seeming to have high barriers to entry.

But do they? A growing globally listed equity market now capitalized at approximately USD 3.5 trillion, with daily average trading volumes of USD 15 billion,7 affords funds the liquidity many desire, as well as a “governance advantage” due to the stringent regulatory demands and reporting requirements of listing. So far so good then—but what do the returns look like when holding liquid investments for the long term?

Two interesting outcomes can be observed. First, 10-year annualized returns—as represented by the Dow Jones Brookfield Global Infrastructure Index—compare favorably to the top end of the “Core Plus” range of return expectations (10%-13%). 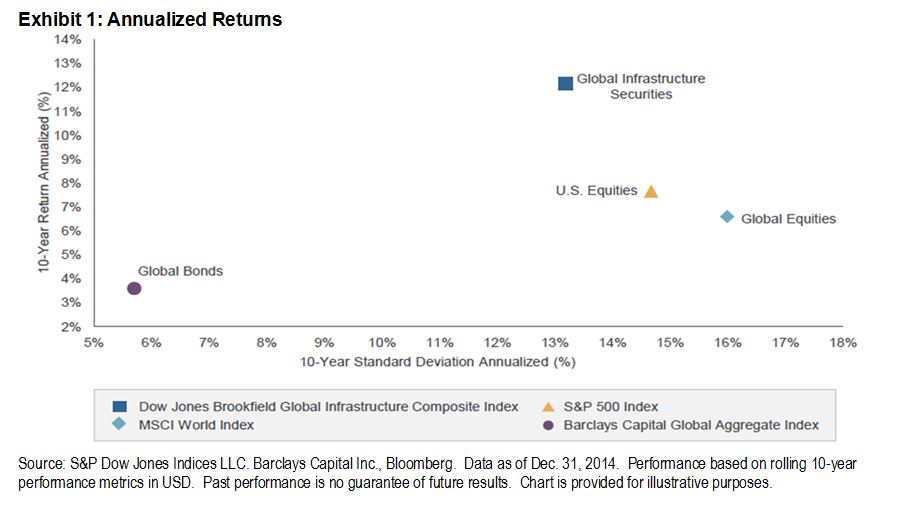 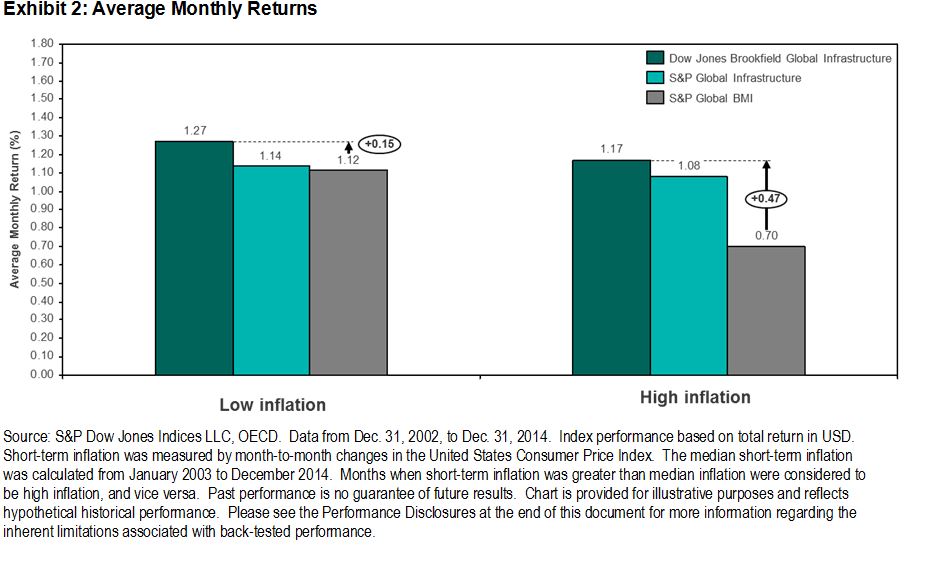 Of course, equity exposure comes with equity risk, although the average 10-year annualized volatility of 13.8% for infrastructure equity versus 17% for global broad equity, along with the notably reduced maximum drawdowns for infrastructure, is observed. 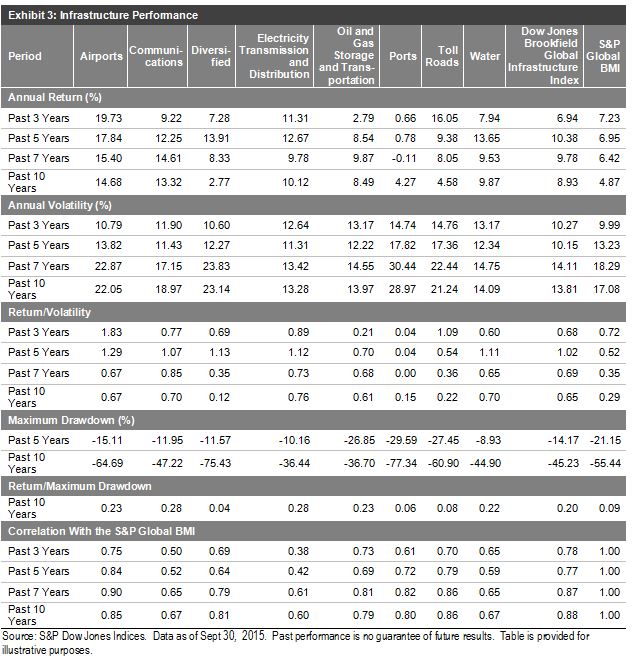 In recent times, such notable names as AP4 and NZ Super have invested in infrastructure through listed securities.8 With exposure to desirable characteristics of return and inflation protection also possible in the cost efficient, indexed manner so many pension funds now embrace, listed markets could bridge the perceived governance and expertise gap bringing the asset class in closer reach to even the smallest funds without the (toll) fees that have historically been the norm.

The Middle East and North Africa (MENA) region recorded strong growth in the sukuk market in the first 10 months of 2015.  The market value, as tracked by the S&P MENA Sukuk Index, rose 14% YTD to 37 billion, compared with the mere 1% growth in the conventional bond market in the region.  The sukuk market has expanded 37% since the S&P MENA Sukuk Index’s inception in July 2013.  United Arab Emirates is the most active issuing country in the region, and it remains dominant in terms of country exposure at 52%, followed by Saudi Arabia at 17%.

Overall, governments have continued to diversify their funding platforms, and the global sukuk market has witnessed solid support from the lack of primary supply.

Key highlights of the past quarter that ended Sept. 30, 2015 were the continued fall in wholesale and retail inflation, the devaluation of the yuan and the subsequent reduction in interest rates by the Chinese government, the Fed keeping interest rates the same, and the reduction in the repo rate by the Reserve Bank of India (RBI).  Amid all these events, the third quarter of 2015 was weak for Indian markets, with India’s broad market index, the S&P BSE AllCap, posting a loss of 3.1% and the S&P BSE SENSEX declining further, at -5.4% (please see Appendix for a market heat map and monthly total returns).

During July 2015, most of the benchmark indices posted gains, and the S&P BSE MidCap and the S&P BSE SmallCap outperformed the S&P BSE LargeCap.  In August 2015, the Chinese government devalued the yuan to remain competitive in exports; the surprise move created apprehension in the global markets, resulting in a depreciation of various emerging market currencies.  August 2015 was the worst month of the third quarter, as all size and sector benchmark indices (except for the S&P BSE Information Technology and S&P BSE Healthcare) posted negative returns.  However, in September 2015, the Fed’s decision not to change its interest rates and the RBI’s decision to reduce its interest rate (the repo rate) by 50 bps helped the S&P BSE SENSEX to recover from its quarterly low of 24,833.54, as it closed marginally lower than the previous month, posting a return of -0.4%.

Within benchmark size indices, the S&P BSE MidCap was the best-performing index, with a total return of 1.9% during the quarter.  Large-cap stocks were the worst performing, with the S&P BSE LargeCap posting a return of -4.9% during the same period.  The S&P BSE SmallCap posted a marginal gain of 0.1% during the third quarter of 2015. 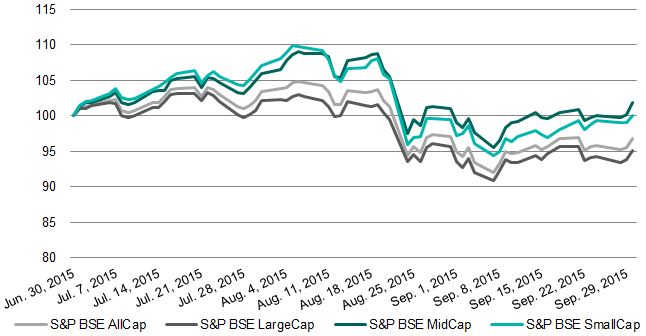 Source: Asia Index Private Limited.  Index performance based on total return in INR.  Data from June 30, 2015, to Sept. 30, 2015.  Past performance is no guarantee of future results.  Chart is provided for illustrative purposes.