Energy Stocks Might Be The Wrong Play As Oil Rises

Who’s in charge of your investments – Captain Kirk or Mr. Spock?

Will Greece Default, And Does It Matter?

Questions and Answers from our Passive vs Active Webinar

This is the second blog in a series on the evolution of Australia’s tax-aware investment management (TAIM) landscape.

One historical record of the impact of taxes on returns in Australia is the annual Russell Investments/Australian Securities Exchange (ASX) Long-term Investing Report, which measures pre- and post-tax returns for various asset classes over 20-year periods.  The returns for a selection of asset classes from the most recent report are depicted below: 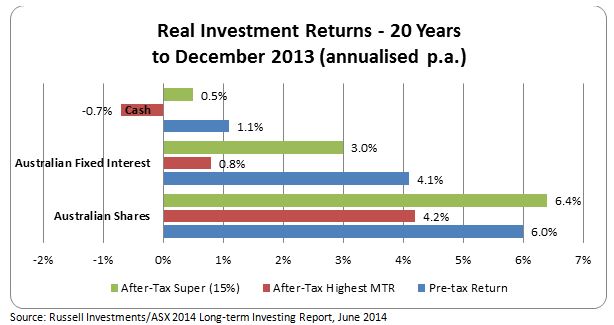 The chart above shows the annualised inflation-adjusted index returns for Australian shares, fixed interest, and cash on a pre-tax basis, together with how those returns changed with the impact of taxes for two different types of taxpayers; superannuation funds (in accumulation mode) and an individual on the highest marginal tax rate(MTR).

The data indicates that Australian shares returned 6% p.a., after inflation, from December 1993 –December 2013, significantly ahead of Australian fixed interest at 4.1% p.a., and cash at 1.1% p.a.  Once taxes are incorporated however, things start to look markedly different. An individual on the highest MTR had 1.8% p.a. removed from the pre-tax return, while a super fund received a tax-derived 0.4% p.a. boost to the index return for the entire 20-year period.

Fixed interest investors received not the 4.1% p.a. the market delivered, but either 0.8% p.a. or 3% p.a., depending on their tax status.  As for cash investors, the 1.1% p.a. market return was either halved or actually turned negative due to the tax effect.

Energy Stocks Might Be The Wrong Play As Oil Rises

The headline story in oil is that it settled at its highest level of the year. Prices got a boost from a weaker U.S. dollar and there is an expectation in the market that weekly data will show a decline in U.S. crude inventories. The next story is that energy stocks rallied on higher oil, but historical data shows that energy stocks may not be the best bet to play an oil rally.

Of course, energy futures and oil and gas producing stocks, are related as evident in the chart below, but it may not be as much as expected. The correlation is 0.79 between the S&P GSCI Energy and S&P Commodity Producers Oil & Gas Exploration & Production Index TR, using monthly data from Dec 30, 2005 – May 29, 2015. There are influences on stocks of producers that may not be related to the oil price but aim to maximize shareholder value. For example, decisions on dividends, debt/equity ratios or even hedging out the price of oil may drive the stock price independently from the underlying oil price. 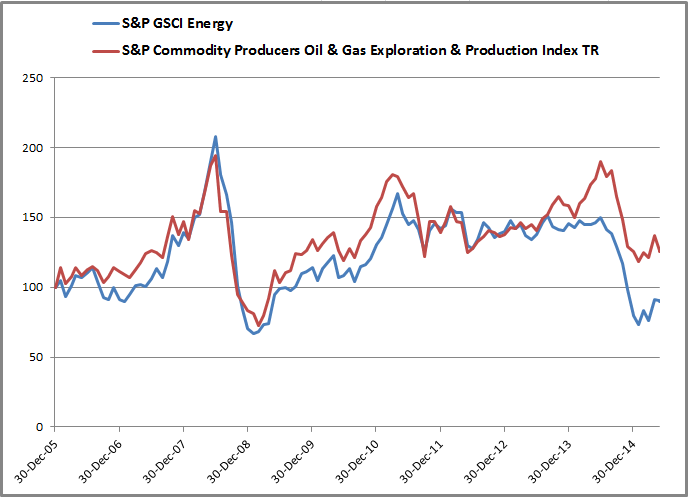 The annualized volatility of the stocks of producers is basically the same as the futures at 28% versus 29% but for every 1% move in oil futures (up or down), the stocks only move 74 basis points as measured by beta. What is more interesting to study is how oil stocks perform versus oil futures in up and down markets. On average in a down month for oil, futures drop 6.8% versus only 4.9% for the stocks; however, when oil rises, futures rise 6.1% on average in a month but stocks only rise 4.9%.

The bottom line is if oil is dropping, stocks may be the safer way to play, but when oil is rising, it might be time to switch to futures.

Who’s in charge of your investments – Captain Kirk or Mr. Spock?

I have a confession – earning the market return minus expenses does not feel very enticing. Reasonably well-run index funds will do just that, and probably land within the 2nd or 3rd performance quartile year in and year out. But is that the best I can do? Where’s the satisfaction? My inner Captain Kirk wants an investment that will crush the market.

On the other hand, my inner Spock guides me to observe empirical data and apply logic. And Mr. Spock is telling me that if I want to compound returns effectively over time, which is the only way I know of to grow wealth, indexing is my friend. Here’s why:

Look at the odds. In every period there are some active managers that outperform the market. But the chances of picking a manager that outperforms in the next period and into future periods are quite slim. Here’s a table showing results of active small-cap funds from our December 2014 issue of Persistence Scorecard:

Almost 30% of 1st quartile small-cap funds, as of September 2011, had fallen to the 4th quartile as of September 2014. Only 22% repeated their 1st quartile performance. Random odds would give a 25% chance if funds did not close, merge, or liquidate. The persistence data shows that active small-cap managers tend to move about in terms of their relative standing. It’s quite likely that if one is fortunate enough to invest with a 1st quartile manager in one period, the manager may fall in performance rankings in future periods.

After three years, the active strategy is winning by $86. But by the fifth year the slow and steady median small-cap index fund is out in front by $33. After the sixth year, the active strategy is behind by $121. Maybe earning consistent 2nd – 3rd quartile returns is not so dull after all. In any event, I’m betting that maximizing my chances to “Live long and prosper…” will lead to more lifelong satisfaction than going for short term emotional gratification. Sorry Captain Kirk.

I’m presenting this material, along with some related ideas this Thursday afternoon during a complimentary webinar, “Not All Small-Cap Indices are Created Equal,” hosted by S&P DJI.

Will Greece Default, And Does It Matter?

Once again, Europe’s banking and finance chiefs are hunkered around the negotiating table. The Greek prime minister is optimistic a deal can be reached, the German finance minister dismissive. A debt payment is due; it is two minutes to midnight.  The markets are hanging by a thread on the outcome.

Writing the news is getting easy – just cut and paste from the last time a Greek payment was due.

You could be forgiven for assuming nothing has changed, and a deal should be expected in the final hours of the latest crisis. This is at least an empirical approach.

But there are important distinctions to be drawn between the current impasse and previous ones.  If Greek equities, Greek bonds and Greek GDP disappeared, it would certainly be a tragedy, but not of epic and globally destructive proportions.  And it is more likely that Greece will default precisely because it is now bearable.

It is bearable because the IMF and the European Central Bank now own pretty much every bond on which the Greek government can default.  There other holders, but not many of them. By now, each knows the risks.

It is bearable because, while Europe’s equity markets as a whole amount to EUR €10 trillion,  our broad-based equity index for the region, the S&P Greece BMI, comprises just 39 stocks with a combined free-float market capitalization of EUR €19.7 billion – about two one-thousandths of the former.

It is bearable because the GDP of Greece is now less than 1.5% of Europe’s – an amount otherwise sufficient to distinguish a great quarter of growth from a one of mild disappointment.

Of course, the risks of a Greek default have always been in the unknowable, the fall in confidence, the “contagion” —  the secondary consequences.  And it is in this respect that the world is different. Europe’s economy overall is growing again, and is more immune to shock.  The majority of the region’s banks have completed stress tests in 2014 that, unlike the 2011 equivalents, explicitly tested robustness in the event of a default by Greece’s government.  The financial markets have had ample time to prepare for downstream effects.  Most importantly,  the economies and markets viewed as most likely to suffer from contagion —  Ireland, Italy, Portugal and, to a lesser extent, Spain – are looking much healthier.  It is harder to see the next domino to fall.

In short, a Greek default looks more palatable today than at any point since this crisis began.  And that is important precisely because political forces are at the heart of negotiations.  If a default is more economically bearable, it is more politically feasible.

Europe does not want Greece to default, but it is a balance.  The scales are now differently tipped. The Greek government does not wish to default either. But they were elected to renegotiate the terms of the current bailout agreements, remain in the euro currency block and to “end austerity”.  If not all of those objectives can be achieved, they may well see the last objective as paramount.  If a last minute deal is found, our headline can be put back into storage to be ready for the next crisis.

Thus characterized: a Greek default might indeed occur, but only if it doesn’t really matter.

Questions and Answers from our Passive vs Active Webinar

In the last post I wrote, I mentioned that I recently moderated a global webinar for financial advisors on the topic of S&P DJI research on passive vs active.  We received 20 questions during the course of this webinar.  I thought that it would be interesting to share some of those questions from advisors and the answers that our panelists provided.  The replay of the webinar is available if you missed it.

Question:  To what extent does using S&P DJI’s proprietary indices affect the outcome of the SPIVA studies?

Answer from Aye Soe, Global Head of Index Research & Design at S&P Dow Jones Indices:  That certainly does matter.  A great example of how much it can matter is in the U.S. Smallcap space.  In research we recently published, we found that the S&P SmallCap 600 outperformed the Russell 2000 Index by 172 bps per annum between 1994 and 2014.  This example shows the importance of benchmark selection.

Question:  How could the SPIVA results change if you stripped out the closet indexers and only looked at truly active managers?

Answer from Rick Ferri, Founder and Managing Partner of Portfolio Solutions: We did not attempt to define what a closet indexer was or separate those funds from other actively managed funds.

Answer from Aye Soe:  We use the University of Chicago’s Center for Research in Security Prices (CRSP) Survivorship Bias Free Mutual Fund Database.  Our goal is to provide an “apples to apples” comparison in size, style, and other characteristics to compare indices to mutual funds.  Active share and closet Indexing are topics which seem to be getting more analytical attention, but closet indexers is not a strong definition or classification that we have yet incorporated into our research.

Answer from Aye Soe:  SPIVA and Persistence, when used together show how difficult “alpha” is to deliver and sustain.  So it isn’t a myth but it might be described as rare.

We did not have time to answer all the questions we received during the webinar.  I followed up with our three presenters and then personally emailed consolidated answers from our presenters to each person who sent in a question.  I want to conclude by emphasizing that all three of our presenters made the point (which is documented in our Persistence Scorecard research) that past delivery of alpha is no guarantee of future delivery.   Rick questioned whether taking the chance in selecting active managers is a good bet.  He showed data on the median of outperformance and the median of underperformance indicating a negative skew.  Here is one graph from Rick’s study that shows this skew: 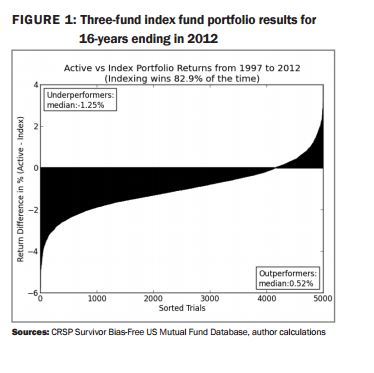