Are Green Bonds Really in the Red?

THIS Could Change If Oil Slides 50% More 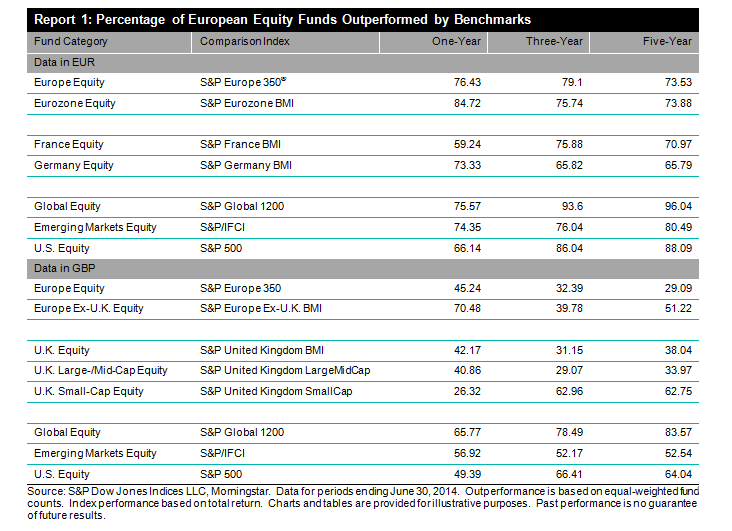 Anxiety over deflation is wide-spread and increasing.  The New York Times lead editorial on Sunday warned that weakening commodity prices may be a harbinger deflation or a hint of economic decline.   Despite a few contrary voices, both policy makers and investors seem concerned.  Are the fears misplaced? Or would deflation be a large step backward? 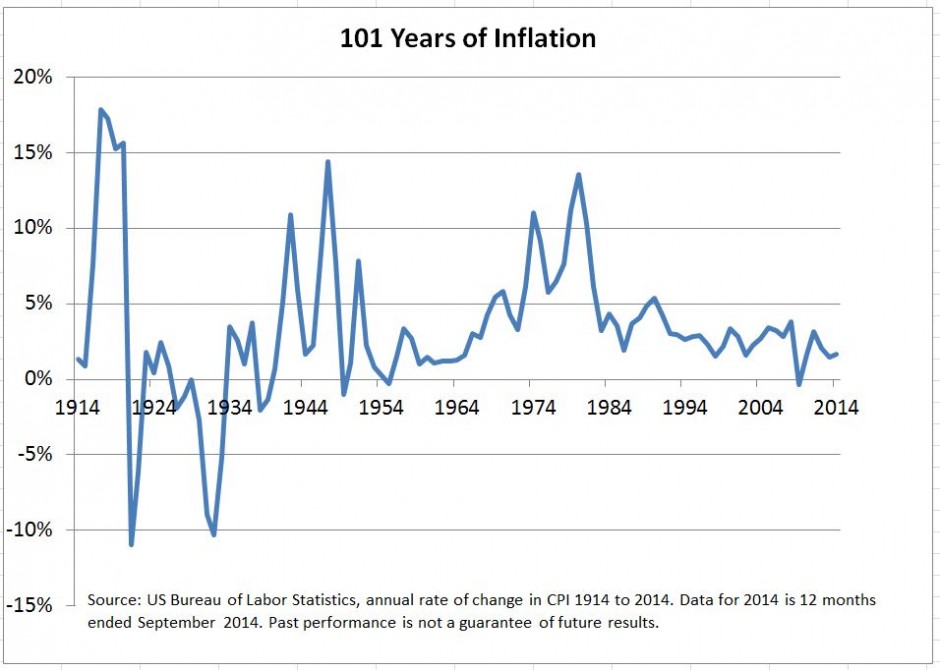 The chart shows 101 years of American inflation measured by the CPI.

Prices move all the time – not just stock prices but prices of almost everything in the economy. Deflation is when prices, usually measured by an index like the CPI, consistently fall.  Inflation is the opposite, prices rise. Largely, but not completely, inflation and deflation are mirror images of one-another; for now call them flation.  If flation’s movements aren’t too sudden, surprising or violent and if everyone anticipates them, the damage would be minimal.  Anticipation is important because financial contracts often specify payments made over time and rarely adjust the payments for flation.  When prices rise, goods and services cost more but money is worth less; in deflation prices fall, goods and services cost less and money is worth more.  If everyone expected 5% inflation and all existing and future loans, bonds, contracts and agreements reflected 5% inflation – and the prediction came true – no one would be hurt by inflation.  Bond holders and other lenders would be compensated for the falling value of money with higher interest rates.  Prices and wages would smoothly adjust.  For a visitor from a foreign country with stable prices the only hints that things were different would be seemingly high nominal interest rates and a falling currency.   Of course this no-pain world of 5% inflation cannot exist – inflation expectations won’t be universal, predictions won’t always come true, prices will depart from their expected path and policy makers will keep changing the game plan.

There are some differences between deflation and inflation. An economy of fully anticipated deflation would be worse than one of anticipated inflation.  First, interest rates can’t go below zero – if some tells you that if you deposit money in a bank, the bank will pay you -5% interest — take 5% of your money and not give you anything in return – you’ll hold on to your cash. Suppose prices are falling 5% per year and government bonds pay 1%. The deflation-adjusted return on the bond is 6% and it is risk free.  Risky investments don’t look very attractive when the risk free real rate of return is boosted by deflation.   Deflation at 1% or 2% might not be a huge impediment to investing, but flation is rarely stable. As investment dries up and the economy slumps, 2% deflation will become 4% or 6% or more.  When prices fall, the best investment is often holding on to your money – its works best by not working at all.

Business faces problems in deflation – as the prices a company receives for its products or services decline, it will try to pay less for everything  – materials, office space, capital and people.  Renters will pressure landlords to lower rents, forcing down real estate values. If capital means bonds, business may face high real rates of interest if bonds were issued before prices began to fall. The it is equity capital, dividends are more expensive. Companies will cut wages and salaries; or, fearing that the best people may leave, will lay off workers.  Were prices slowly rising rather than falling, companies would be able to raise wages and salaries by roughly the same proportion as the inflation rate without paying significantly more in inflation-adjusted wages.

These two factors – that interest rates cannot fall below zero and that people can accept a little bit of inflation with some money illusion – mean that moderate inflation is workable while moderate deflation is not.  For either flation there is a large danger – as the rate expands, it becomes more volatile, less predictable and more damaging.  That is why central banks were so proud of keeping inflation low in the 1980s and 1990s.

With prices rising less than 2% in the US, less than 1% in Europe and oil plunging by 20% since July, should we worry?  The oil price plunge is a different story. While it does contribute to lower prices across the global economy, the drop in oil prices stems from new supply and the structure of the oil markets.  The miniscule increases in prices, much below current policy targets, are a symptom of an economy where demand is growing more slowly than potential supply.  In Europe, the US and Japan, there is sufficient underutilized labor and capital to support faster growth. Slowing or falling prices mean that people, business and government, out of either fear or risk aversion, prefers to hold on to its money rather than spending it. There is room to grow, we just need the right policy to get it started.

Are Green Bonds Really in the Red?

The green credit market has grown 50% annually since 2007, however market sentiment remains mixed on performance.  The S&P Green Bond Index is down 0.99% YTD, when most of the bond market has done quite well in 2014.  Abundant growth in concert with poor performance could prompt the suggestion that investors are deriving utility from social responsibility in lieu of returns.

Abengoa Greenfield’s equity shares fell 18%, while the price of their 2021 notes fell from $96 to $83 Thursday, following market confusion about the recourse status of the Spanish clean energy firm’s “guaranteed” debt.  Abengoa comprises 2.5% of the S&P Green Bond Index which fell 0.11% yesterday.  This type of volatility is somewhat of an anomaly for the budding market, with the majority of the index being comprised of extremely high rated supranational debt.  The S&P/BGCantor U.S. Treasury Bond Index is up 3.06% in 2014, surpassing its five year annualized return of 2.86%.

The green bond universe is still vastly made up of supranational organizations and performs accordingly, however as segments within the market continue to develop, green bonds are beginning to show their true colors.

THIS Could Change If Oil Slides 50% More

Now that brent broke the $80 mark, many are questioning whether a bottom has been reached.  The combination of slowing Chinese demand growth and Saudi’s will to maintain market share make this an unlikely bottom, but it depends more on the supply growth than the slowing demand growth from China.

Kuwait and Saudi Arabia have shown signs they are willing to tolerate lower prices.  If prices continue to drop significantly, there may be not only a pickup in demand but a split where regions that are less heavily reliant on exports like in Africa and Asia may accelerate compared with a more pronounced slowdown from areas like S. America that depend on oil exports for their demand growth. The IEA predicts an acceleration of up to 2.6%, up 800 kb/d, led by Asia, Africa and the Middle East that will overpower slower growth from sanctions-hit Russia.

While oil would need to drop below $40 to seriously hinder US production, it only needs to hit below $70 to impact weaker marginal oil producing countries Brazil and like Russia – or even put OPEC into a panic.  I was asked if this could happen in a Sky interview, and it is possible oil could slide another 50%.

In a NYT Op-Ed, it was pointed out from a prior article that “there is a precedent [for] such joint action that caused the collapse of the U.S.S.R. In 1985, the Kingdom dramatically increased oil production from 2 million to 10 million barrels per day, dropping the price from $32 to $10 per barrel. [The] U.S.S.R. began selling some batches at an even lower price, about $6 per barrel. Saudi Arabia [did not lose] anything, because when prices fell by 3.5 times [Saudi] production increased fivefold. The planned economy of the Soviet Union was not able to cope with falling export revenues, and this was one of the reasons for the collapse of the U.S.S.R.”

However, the slide in oil prices may stimulate the economy. In a separate Reuters interview, I was asked whether we might see gas below $2 since that may help stimulate the economy driven by the retail consumer.  We would probably need to see oil slide another 50% in order for this to happen, given the last time gas prices were that low was in 2009, post the financial crisis. (See in the chart below).  That could happen if Saudi really wants to destroy other oil producers in spite of itself, just like it cut prices by more than half in the 80’s.