The S&P GSCI 2015 Rebalance Preview marks a historic shift in the benchmark renowned for its world production weight.  According to this announcement of pro-forma weights, Brent crude oil is targeted take over WTI‘s status as the leading oil benchmark and the most heavily weighted commodity in the S&P GSCI. This is the first time since 1997 that a commodity other than WTI crude oil is set to be the most heavily weighted. (Natural gas was greater at times from 1994-7.) 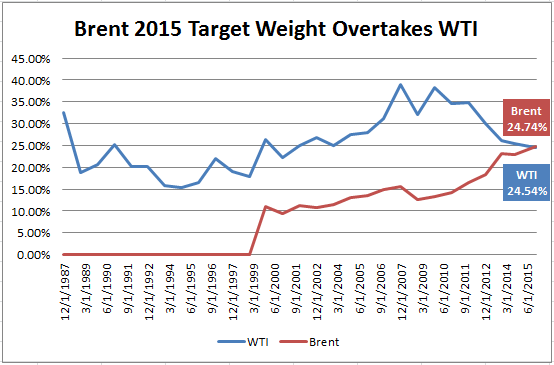 The dynamics of the crude market have changed, especially since 2010, as unconventional crude and liquids have seen an explosive growth in production from shale oil fields in Texas, North Dakota and also from increased Canadian imports. This increased supply of crude oil resulted in bottlenecks and oversupply at the Cushing pipeline nexus, which put pricing pressure on WTI. Now, pipeline capacity has been increased and transportation improved to reduce the Brent premium.  The chart below shows the premium collapse in index terms that in dollar terms translates from a high of about $20 to near parity today. 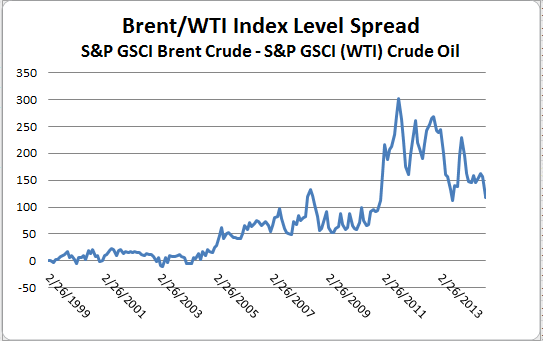 While in the Americas, WTI crude remains the benchmark for pricing, a number of U.S. based hedgers use Brent due to its global fundamental relevance, and also since it is internationally arbitraged to U.S. refined oil product exports and oil imports. Since U.S. refined product exports and oil imports are not constrained by pipeline infrastructure, or restrictions on exporting U.S. crude, Brent futures are used as effective hedging tools. Below is a map that shows the widespread influence of Brent oil in benchmark pricing. 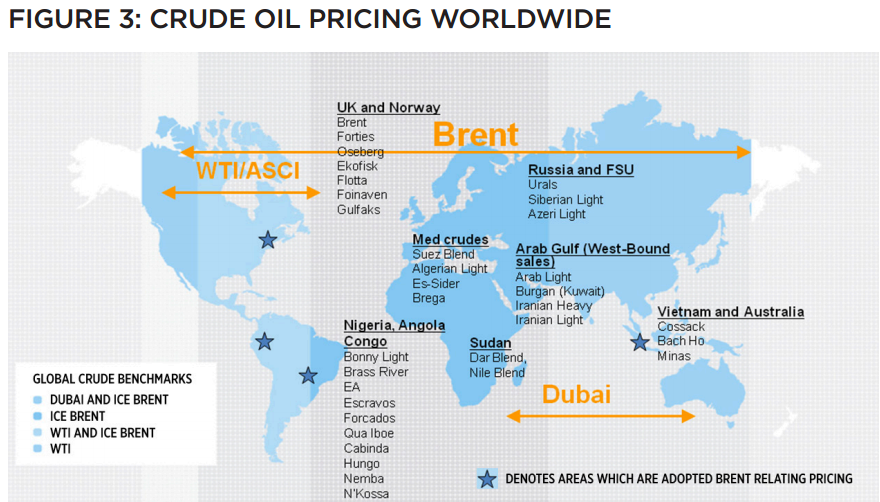 Might this mean a greater opportunity for producers to hedge? Recently, the Brent curve has collapsed from bearish secular trends for the Atlantic Basin and Asia imports from West Africa. However, this puts pressure on Middle East suppliers to cut back. So there are both bull and bear pressures on Brent, making it likely range-bound – but conceivably at a lower range. More disruptions are possible and only a major one, probably from the Middle East might offset more production, especially from Saudi Arabia. Though influences from new refinery capacity in the Middle East may substitute crude supplies with products. On the upside in the short term, production growth in Lybia and Iraq is unlikely to grow fast enough to surpass disruptions from Nigeria and Venezeula.