The 19th National Congress of the Communist Party of China (CPC), one of the most important political events this year, will be convened on Oct 18. The reshuffling of the Politburo Standing Committee (PSC) members is crucial to the centralization of power for the new government, as well as the economic and social policies in the coming few years.  On the economic front, the continuity of the following policies may have significant impact to the capital markets.

The “two sessions” (The fifth sessions of the 12th National People’s Congress and the 12th National Committee of the Chinese People’s Political Consultative Conference) held in March set the tone for the upcoming party congress, at which containing financial risks and maintaining economic stability were emphasized. In the run-up of the congress, the government is working on deleveraging as evidenced by the decrease in the growth in M2. M2 grew 8.9% yoy in August 2017, hitting a record low since 1996.[1] Moreover, eight cities rolled out housing tightening measures ahead of the congress, with most banning home sales within two to three years after purchases.[2] It showed that the government is determined to curb the property bubble. It is believed that the new government will continue to guard the economy against financial shocks.

Over the past few years, the government is committed to supply-side reform, by which overcapacity is being reduced, resulting the pick-up of PPI and industrial enterprises profits. Regarding state-owned enterprises (SOEs) reform, 32 SOEs have accomplished restructuring since 2013, according to Premier Li Keqiang. As a result, management and operation costs decreased and efficiency improved, leading to 40% increase in profits from 2012 to 2016 for the restructured SOEs.[3] The pace of SOEs reform could be accelerated if political power is consolidated by the political reshuffle.

Stability is the key to the economic development of China. We believe the new government will pay the utmost effort to rein in risks and promote sustainable growth. Deleverage may challenge the financial sector in the short-term but will lead to healthier growth in the long-term. We expect new economy sectors such as Information Technology, Consumer and Health Care are less affected by the transitions of powers.

Chinese equities advanced solidly in August benefited from resilient corporate earnings and stable macro environment before the congress. The S&P China 500 Index recorded a strong growth of 32.59% YTD (as of Aug 31, 2017). 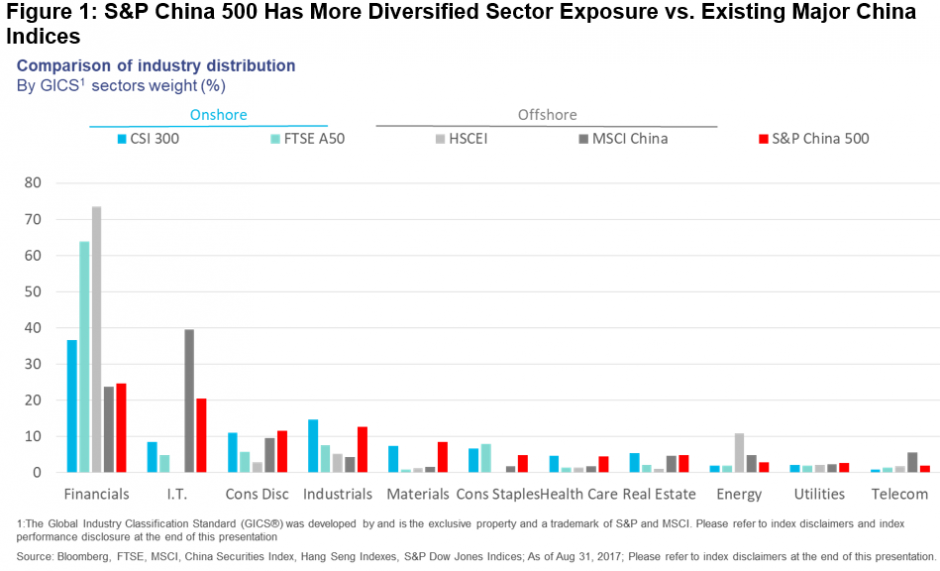 Benefited from its diversification in markets and sectors exposure, S&P China 500 has demonstrated better risk-adjusted returns (Figure 2). During the period from 31 Dec, 2008 to 31 Aug, 2017, the S&P China 500 generated an annualized return of 12.5% and Sharpe ratio of 0.55, both are the highest among the major China indices. 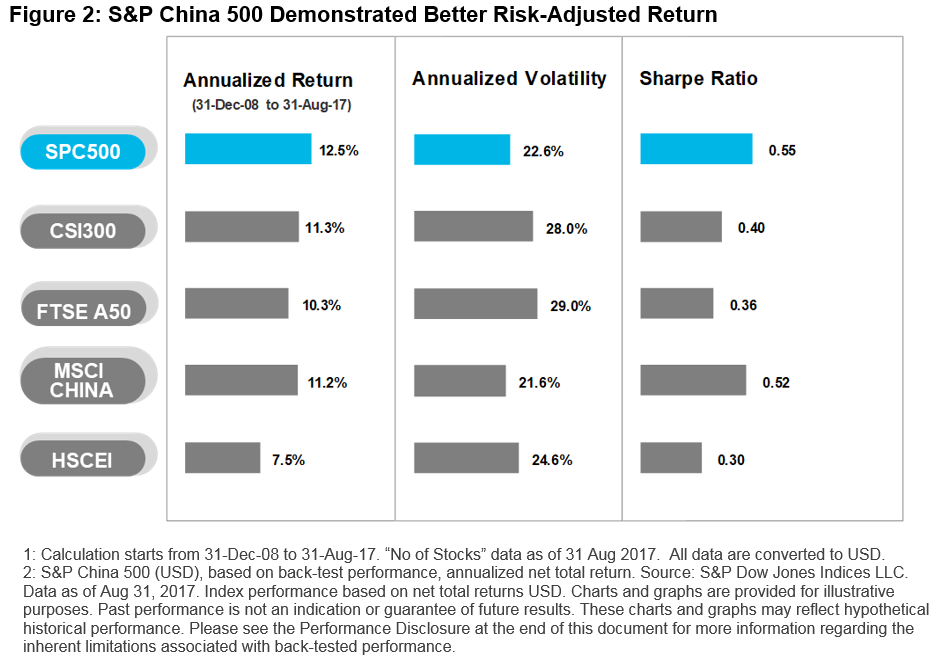 The views and opinions expressed in this document, which are subject to change without notice, are those of S&P Dow Jones Indices LLC, ICBC Credit Suisse and/or its affiliated companies at the time of publication. While S&P Dow Jones Indices LLC, ICBC Credit Suisse and/or its affiliated companies (collectively as “we” or “us”) believe that the information is correct at the date of this presentation, no warranty of representation is given to this effect and no responsibility can be accepted by us to any intermediaries or end users for any action taken on the basis of this information. Some of the information contained herein including any expression of opinion or forecast has been obtained from or is based on sources believed by us to be reliable as at the date it is made, but is not guaranteed and we do not warrant nor do we accept liability as to adequacy, accuracy, reliability or completeness of such information.  The information is given on the understanding that any person who acts upon it or otherwise changes his or her position in reliance thereon does so entirely at his or her own risk without liability on our part.

This material has not been reviewed by the Hong Kong Securities and Futures Commission.  Issuer of this material: ICBC Credit Suisse Asset Management (International) Company Limited. This material shall be distributed in countries where it is permitted.

The S&P China 500 was launched on August 28, 2015. All information presented prior to an index’s Launch Date is hypothetical (back-tested), not actual performance. The back-test calculations are based on the same methodology that was in effect on the index Launch Date. Complete index methodology details are available at www.spdji.com. Please read S&P Dow Jones Indices LLC’s DISCLAIMERS.