How to Build a TIPS Ladder Portfolio for Millennials

In the context of declining commodity prices following the global financial crisis, inverse indices became popular for market participants looking to profit from negative returns. As the oil war unfolded and drove commodity prices further down, market participants took a renewed interest in using inverse indices to bet against the market. When commodities rebounded last year, market participants remained opportunistic, demanding leveraged indices for the potential to earn extra in the comeback by doubling down. However, there have been some questions and observations about the performance of inverse and leveraged indices as their popularity has increased.

What happens to the cumulative returns when the daily returns move in opposite directions?  In this case, the magnitude of the returns matters, but not the order. If a market participant were to pursue both strategies, it would likely be a losing proposition in a choppy market. The only way to profit is by picking whether the larger absolute return will be positive or negative and using the standard long index for the larger absolute positive return and the inverse index, which is like a short position, for the larger absolute negative return. If the magnitudes of the opposite consecutive returns are the same, the directional order makes no difference, as shown in the first column of Exhibit 2, and there is a certain loss for both the standard and inverse indices. However, there is a chance to win if opting for only one strategy with a correct bet on the bigger absolute return, regardless of order.

Are there some commodities that trend more than others, and might be advantageous in a 2x leveraged or inverse version?  The most popular commodities used in 2x leveraged and inverse indices for products are Brent crude, copper, corn, WTI crude oil, gold, natural gas, silver, and soybeans.

Given that corn trended the most and had relatively large gains to losses on opposite days during the period studied, it may be the best overall commodity choice for 2x leveraged and inverse indices. Natural gas may be a strong choice for an inverse index, based on its high consecutive negative returns and high losses in opposite consecutive daily returns. Copper also had more losses on opposite days, which may be beneficial in its inverse version. Lastly, gold and silver may be good choices for the 2x leveraged indices, based on their high positive consecutive return rates, even though silver was more choppy than trending.

We explored the topic of building a 30-year TIPS portfolio in a previous blog.  If the numbers we threw around seemed too big (USD 5,000 or USD 10,000 per year over a long period of time) for a Millennial, don’t lose heart.  The U.S. Series I Savings Bonds (or I Bonds) provide an easy way to save for beginners.  Currently, any investor with a social security number can buy up to USD 10,000 per year in I Bonds, with minimum purchase of USD 25 per transaction.  This makes it much easier for a Millennial to put aside, say, USD 31.33 if he wants to save only that much.  Yes, you read that right, you can buy an I Bond to the penny, as long as it is over USD 25.00.

There are some basic differences between TIPS and I Bonds, but essentially both are financial instruments that allow one to hedge against inflation over time.  For a good illustration, please visit the TreasuryDirect website, https://www.treasurydirect.gov/.

Why bother with putting away such a small amount (in this example, USD 31.33)?  This gets at the heart of retirement readiness.  To be retirement ready, one needs to pay attention to three drivers: (1) contribution, (2) investment strategy, and (3) spending goals.  Savings are directly related to the first driver—contribution.  Whether or not retirement has been funded adequately, funding has to begin somewhere.  A thousand-mile journey begins with the first step, as does the wealth accumulation for one’s retirement income, by modest savings.  Once the amount saved has reached some critical mass, more finely calibrated investment strategy can be adopted to further grow the investment assets.  We will leave the last driver—spending goals—alone, for the time being.

I Bonds can be useful in this undertaking of funding for one’s eventual retirement many years down the road as a supplement other funding schemes.  They are meant to be long-term investments, and they continue to earn interest for up to 30 years.  Interest on an I Bond is a combination of two rates: (a) a fixed rate of return, which remains the same throughout the life of the I Bond, and (b) a variable inflation rate, which is calculated twice a year, based on changes in the nonseasonally adjusted Consumer Price Index for all Urban Consumers (CPI-U) for all items, including food and energy (CPI-U for March compared with the CPI-U for September of the same year, and then CPI-U for September compared with the CPI-U for March of the following year).

Those who invest in active funds may expect portfolio managers to deliver excess returns over their benchmark indices for the fee they paid.  However, results from the SPIVA® (S&P Indices Versus Active) India Scorecard suggest this may not always be the case.  The scorecard, which is a biannual report, attempts to capture the performance of active funds (both equity and debt funds) domiciled in India against S&P BSE benchmarks over different time horizons.

In our extended study of Indian Equity Large-Cap and Indian Equity Mid-/Small-Cap fund performance, we found that fund managers did not deliver persistent outperformance across market cycles.  We divided the ten-year period ending December 2016 into three market regimes, including bear (peak to trough), recovery (first 12 months after the trough), and bull phase (from recovery to the peak), based on the S&P BSE Sensex total return performance, and examined performance of the Indian Equity Large-Cap and Indian Equity Mid-/Small-Cap funds in different markets (see Exhibit 1).  We also compared asset-weighted and equal-weighted excess returns versus the benchmarks for these two categories, in order to understand how the larger funds (by assets under management) performed against their peers.

We observed that the fund returns in these two categories had relatively low beta across different market cycles, which may have been driven by allocation to cash or defensive/low beta stocks in their portfolios.  As a result, the active funds tended to outperform by a more significant margin in bear markets and by a relatively modest margin in bull markets.  This also indicates that the alpha generation by fund managers’ stock selection was more limited during bull markets, which may not be expected.

Furthermore, active funds outperformed in trend-continuation markets and underperformed when the market regime changed, as active funds underperformed their benchmark indices by large margins and their return betas versus their benchmark remained low during recovery phases.  This implied that most fund managers may not have reduced their cash positions or tilted their portfolios to less defensive stocks when the market recovered from market downturns.

Indian Equity Large-Cap and Indian Equity Mid-/Small-Cap funds did not deliver persistent outperformance across different markets; they underperformed or had limited outperformance versus their benchmark for the 10-year period, as reported in our latest SPIVA India Scorecard.  It is also clear that larger funds in these two categories tended to perform better than smaller funds across different market cycles.

Exhibit 3: Outperformance of Indian Large-Cap Funds Versus the S&P BSE 100 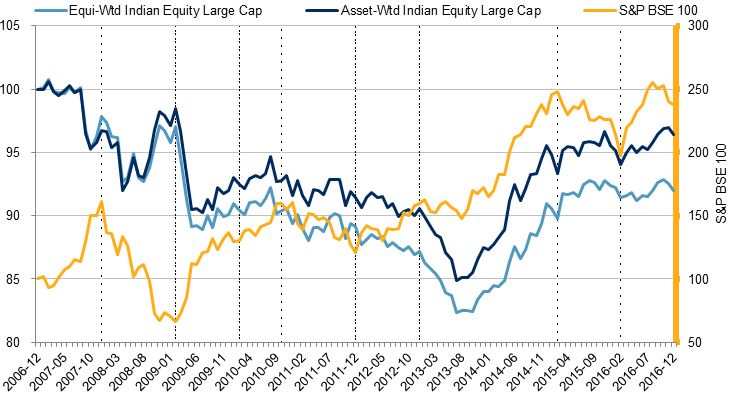 Source: S&P Dow Jones Indices LLC.  Data from December 2006 to December 2016 based on SPIVA India Year-End 2016 Scorecard.  Past performance is no guarantee of future results.  Chart is provided for illustrative purposes. 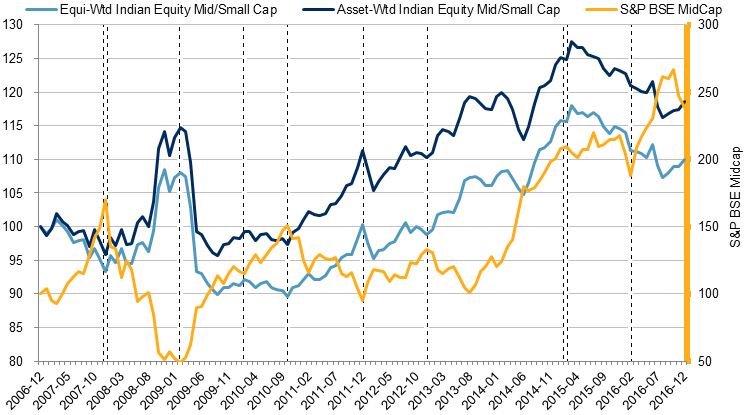 Source: S&P Dow Jones Indices LLC.  Data from December 2006, to December 2016 based on SPIVA India Year-End 2016 Scorecard.  Past performance is no guarantee of future results.  Chart is provided for illustrative purposes and reflects hypothetical historical performance.  The S&P BSE Midcap was launched on April 15, 2015.

How to Build a TIPS Ladder Portfolio for Millennials

In his January blog post entitled “Try a TIPS Mixer in Your Equities Cocktail,” Phillip Murphy described the potential benefits of including Treasury Inflation-Protected Securities (TIPS) in one’s portfolio.  In this blog aimed at Millennials, I would like to propose an easy way to build up a 30-year TIPS portfolio for retirement.

Let us assume that Alice, age 25, wants to create her own do-it-yourself TIPS portfolio to be one of her sources of retirement income when she turns 65, 40 years hence.  Without a lot of investment decision-making experience, what would be an affordable way for Alice to accomplish her goal?

To begin with, it may help for Alice to read “Risk Less and Prosper: Your Guide to Safer Investing,” by Zvi Bodie and Rachelle Taqqu, in which the authors argue for accumulating TIPS in one’s portfolio, because TIPS provide inflation protection and hedge against interest rate risk.  In addition, if the TIPS securities were held to maturity, as would be the case for a laddered portfolio, then there shouldn’t be any risk.

Currently, if Alice has a TreasuryDirect account, she can participate in non-competitive biddings throughout the year.  Some key facts about TIPS are as follows:

For more details, please visit the TreasuryDirect website at: https://www.treasurydirect.gov/indiv/research/indepth/tips/res_tips.htm.

As described by Wikipedia: “TreasuryDirect is a website run by the Bureau of the Fiscal Service under the United States Department of the Treasury that allows U.S. individual investors to purchase Treasury securities such as T-Bills, TIPS, and others directly from the U.S. government.  Its website allows money to be deposited from and withdrawn to personal bank accounts, and allows rolling repurchase of securities as the currently held items mature.”

For Alice, having a 30-year TIPS laddered portfolio of USD 10,000 real income each year would be a nice supplement to her other sources of income from Social Security benefits and defined-contribution retirement savings.  If, along the way to her retirement, she could afford to buy more TIPS, then her TIPS nest-egg could be correspondingly larger.

It may not seem like a big deal to have such a USD 10,000 30-year TIPS laddered portfolio available for retirement income when one is ready to retire.  However, bear in mind that the maximum social security benefits one may get (in current U.S. dollars) is around USD 2,800 per month, or USD 32,600 a year.  In this context, an income of USD 10,000 a year would increase one’s social security income by about one-third.

Equity markets in South Africa, as measured by the S&P South Africa Domestic Shareholder Weighted (DSW) Index ZAR, increase 5% in 2016.  Aside from the GDP contraction experienced in the last quarter of 2016, conditions were generally improving in the country.  For example, the South African rand strengthened during the year and the municipal elections passed without incident.

However, it appears that active managers were not able to take advantage of these more favorable conditions; 72% of South African equity funds underperformed their corresponding S&P DJI benchmark over the one-year period, and 77% underperformed over the 10-year period.

In regard to active funds invested in global markets, funds in South Africa fared poorly during the year and were the worst performers among the fund categories studied in the SPIVA® South Africa Year-End 2016 Scorecard.

For more details of the report, please click here.