Emissions of carbon dioxide and the other greenhouse gasses are often foremost in people’s minds when they consider environmental risk.  This is understandable as, if we continue on our current path, we are set for four degrees Celsius of warming by 2100, compared with pre-industrial levels.  Expected consequences include the flooding of coastal cities, irreversible loss of biodiversity, severe heat waves, and high-intensity tropical cyclones.  2016 has seen Arctic sea ice at its lowest seasonal maximum in satellite records, so warming is already having significant impacts.

Following COP 21 in Paris, we at Trucost have seen a significant uptick in interest from mainstream financial institutions, asset owners, and managers, and the vast majority of this increased attention is focused on carbon.  This is also reflected in recent legislation, such as the Energy Transition Law in France, which will quadruple the country’s carbon tax for fossil fuels by 2020, and the State Bill in California, which requires the California Public Employees’ Retirement System and the California State Teachers’ Retirement System to divest from companies that receive at least one-half of their revenues from coal mining.

However, investors may want to make sure that carbon is not the only environmental factor they consider.  It is clear, for example, that water is increasingly becoming an investment issue.

According to the World Meteorological Organization, global water consumption increased by six times between 1900 and 1995.  The UN Population Division predicts that water scarcity will increase to between 50% and 65% by 2025.  Insufficient access to clean water can significantly disrupt operations, increase costs, and curtail growth.  Despite increasing risks to businesses and communities, the cost of water today in many regions of the world remains relatively low.  Just as carbon emission costs are now increasing, one could expect water prices to follow suit.

It is possible that the correction of this price anomaly will have huge consequences for businesses.  Trucost has calculated that more than one-quarter of the profits of the world’s biggest companies would be wiped out if water were priced to reflect its value.  Exhibit 1 shows the impact on a per-sector basis.  Agriculture would be particularly affected, as it accounts for two-thirds of total freshwater withdrawals (Berggren, 2014). 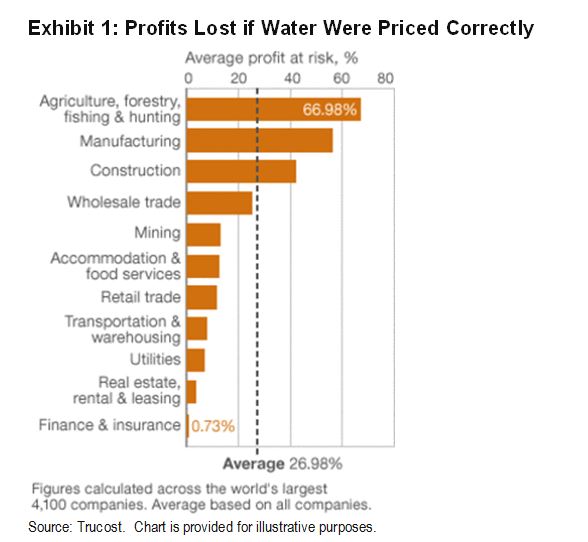 In research on how this may already affect companies’ financial returns, Trucost undertook an analysis to compare the food and beverage companies in our database, based on the amount of water they used though their supply chains.  When we compared the top quintile (least water used) versus the sector average, we found the top quintile companies outperformed the average by 3%.

There are water risks and rewards to be discovered in investment portfolios, and now could be a good time to make sure they are measured correctly.