What are the Missing Pieces in Chinese Fixed Income?

The Essence of VIX: What You Really Need to Know

When we initiated our forecast on the S&P Claims Based Indices late in 2014 we wanted to avoid the effects of the ACA on individual and small group claim costs so we focused our models on the LG/ASO lines of business. Clearly, the 2014 experience on individual shows a sharp divergence in trends from the group business.  Although the delay in the latest release caused some historic revisions in the data, the concept we outlined with our most recent forecast report seems to still be operative, although maybe somewhat muted. 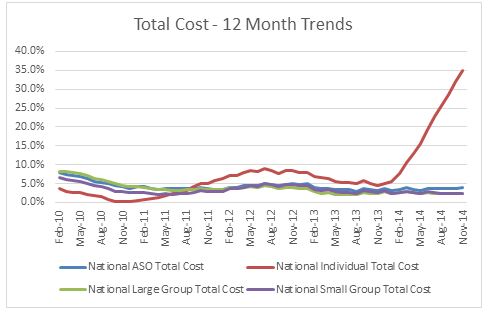 We continue to expect there could be a trend bump in 2015 small group (SG) as electronic enrollment and exchanges for enrollment have become available. While enrollment is increasing, the capacity of hospitals, as measured by employment per capita, has declined below long term average levels and may be negative when compared to potential demand—when considering the impact of the increased number of newly insured. Medicare initiatives to cut readmissions and to increase longer emergency room treatment holds to avoid unnecessary admissions have been affecting both Medicare and non-Medicare hospital patients by reducing admissions.[1]

Our operative theory is that healthcare is primarily a supply driven system, due to consumers being immunized from significant cost due to the effect of insurance. This increases the demand above what it might otherwise have been in the absence of insurance. Although ongoing market increases in deductibles and co-pays have a downward effect on demand, this would only have a marginal impact relative to the effect of having no coverage at all.  This was demonstrated in the Rand Health Insurance Experiment conducted from 1971 to 1986.

[1] Readmission rates are much higher on the Medicare population than the commercial and Medicare has seen significant admission rate reductions in recent years.  Medicare 30 day readmission rates have dropped from an average of 19.0%-19.5% four to seven years ago to under 18% in early 2014.

On May 4, 2015, the Saudi Arabian Capital Market Authority (CMA) released the “Rules for Qualified Foreign Institutions Investment in Listed Shares,” or the QFI program, setting the stage for institutional investors based outside of the Gulf Cooperation Council (GCC) to make direct investments in Saudi Arabian equities for the first time.  Although additional steps will need to be taken to further improve market accessibility in the future, the QFI program is a key step in the development of Saudi Arabia’s equity market.

The QFI rules, which are expected to become effective on June 1, 2015, require institutions to register with the CMA and meet certain qualifications based on assets under management and experience in the financial services industry.  In aggregate, all QFIs will be allowed to own a maximum of 20% of any listed company and a single QFI will be limited to a 5% stake in a single company.

Without a doubt, the QFI program marks a historic moment for Saudi Arabia’s capital markets.  Anticipation surrounding the opening of the Saudi Arabian market to foreigners has buoyed the country’s equity market over the past few years, despite a significant drop in the second half of 2014 driven by the plunge in oil prices.  As of April 30, 2015, the S&P Saudi Arabia had an annualized return of 11.3% over the past three years, widely outperforming the 2.4% return of the S&P Emerging BMI and even beating the 10.8% return of the S&P 500®. 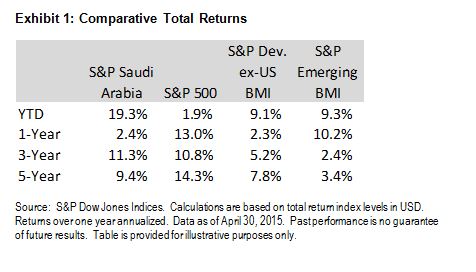 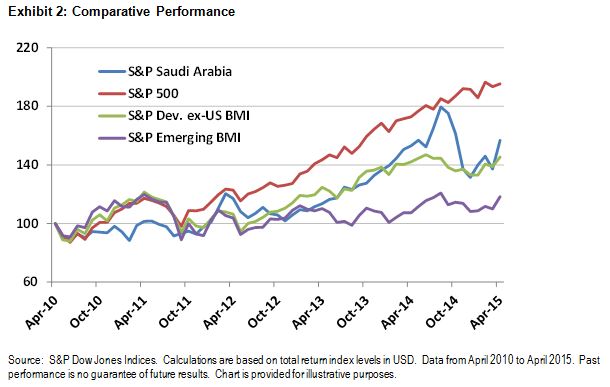 S&P Dow Jones Indices calculates and publishes more indices than any other provider for the Saudi Arabian market and throughout the GCC.  Through our acquisition of the International Finance Corporation (IFC) Indices in 2000, we have been calculating Saudi Arabian equity indices since 1997.

In addition to our flagship S&P Saudi Arabia Index, we publish various size, sector, and industry subindices that are designed to measure different segments of the market.  We also publish blue-chip indices, such as the Dow Jones Saudi Titans 30 Index, that are designed to support index-based financial products.  We also provide multiple versions of various indices reflecting the differing opportunity sets available to domestic Saudi Arabian investors and GCC nationals due to foreign investment restrictions.

What are the Missing Pieces in Chinese Fixed Income?

Unsurprisingly, most Chinese investors favor high-risk and high-return products.  They tend not to find the fixed income assets appealing, especially after the recent China stock rally.  However, Chinese investors often overlook the risk component.  As of April 30, 2015, the three-year annualized risk of China’s equity market1 is 19.5% versus 2.77% of Chinese fixed income, represented by the S&P China Bond Index.

Despite the differences in the regulatory landscape and product demand, we believe the China ETF market could learn from the growth seen in the U.S. ETF market as follows:

China continues to broaden foreign investor access to their onshore bond market. Luxembourg is the latest country being granted an RQFII quota by the People’s Bank of China, followed Canada, Germany, Qatar and Australia.  According to the data published by State Administration of Foreign Exchange (SAFE) on April 29, 2015, the approved RQFII investment quota reached CNY 363 billion, representing a 22% increase from December, 2014. The number of the qualified institutions also rose from 93 to 121.

Among the qualified participants, Hong Kong remains to be the biggest player, with an RQFII quota allocation of around 74%, see exhibit 1 for the country breakdown. Outside of Hong Kong, the most significant development observed was by South Korea, with its approved quota jumping 10 times to CNY 30 billion, while the number of the qualified institutions climbed from 1 to 14 since last December.

In sync with the opening up of its capital markets, the China onshore market has recorded substantial growth in recent years. Tracked by the S&P China Bond Index, the market value of the China onshore bond market reached CNY 28 trillion, as of April 30, 2015. This market has expanded 22% since last year and more than three times since the index first valued on December 29, 2006. The market value tracked by the S&P Japan Bond Index, representing the other giant market in Asia, gained 2.6% and 37% respectively.

In terms of total return performance, the S&P China Bond Index rose 2.14% year-to-date (YTD), after a 10% gain in 2014.  Global investors seem to continue to favor Chinese bonds as they offer relatively higher yields as compared to markets globally. The index’s yield-to-maturity currently stands at 3.91%, compared with 0.27% yield-to-maturity from the S&P Japan Bond Index. Please see exhibit 2 for indices comparison.

The Essence of VIX: What You Really Need to Know

What is the essence of VIX? This may seem like an abstract, philosophical question, but I can assure you it is not. It is a practical one, and if you can understand what makes VIX unique, you will know why this index matters so much.

For most people, VIX is largely associated with the first two bullet points. But many indices use options prices and target certain maturities. The key attribute of VIX – the knowledge you need to take away from this post – comes from the final two bullet points. It has to do with how VIX measures implied volatility, and nothing else.

How is it that we can arrive at an implied volatility value without using an options pricing model like Black-Scholes? And how can it be that the VIX and the S&P 500 price levels are not directly related?

When institutional investors want to trade volatility, they often trade variance swaps. The magic of a variance swap is that by using a portfolio of options weighted in a certain way, the impact of other factors, such as the changing underlying index level, can be neutralized. The trader is left with exposure to volatility alone.

VIX uses the same processes employed in variance swaps to arrive at the same result: exposure to pure volatility. Though the math behind variance swaps is complicated, one simple technique, explained below, liberates VIX from the influence of other factors.

How Volatility is Isolated

To offset this effect, the options need to be reweighted. The result of this reweighting is illustrated in Figure 2. The options demonstrate the same relative sensitivity to implied volatility in the portfolio regardless of the underlying index price.

This is achieved through weighting the options by the inverse of their strike prices, squared. So, options with lower strike prices are given a higher weight to make up for the fact that they naturally have less sensitivity to changes in implied volatility.

This is the essence of the VIX calculation: a reweighting of the options so that exposure to implied volatility rises and falls independently of the underlying index price level. This is what allows VIX to be VIX, a pure measure of volatility, uncontaminated by other effects and factors.

For a deeper dive into this concept – and better charts! – I recommend reading a renowned paper published by Goldman Sachs in 1999. The ideas in this piece served as the foundation for the modernization of the VIX methodology, which took place in 2003.