After more than a decade of underperformance, and in stark contrast to Growth’s dominance for much of 2020, Value has made an impressive comeback so far in 2021, outperforming Growth around the world, including across the size spectrum in the U.S. In fact, Value’s YTD outperformance against Growth in mid and small caps is the largest it’s ever been as of the end of May, while the S&P 500® Value’s 9.5% YTD outperformance is the second highest in its history through the first five months of a year. 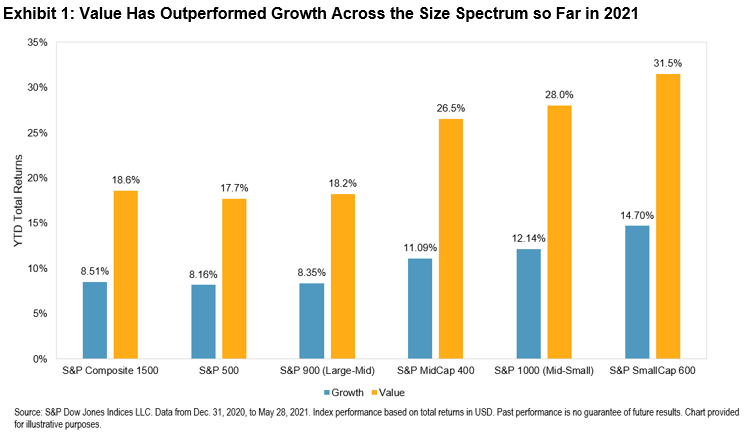 Smaller companies have also outperformed so far this year, which helps to explain why Equal Weight indices, with their smaller size tilt, have outperformed their cap-weighted parents. But the outperformance of smaller size raises an obvious question: since value-oriented companies are typically smaller than their growth counterparts (see Exhibit 2), is Value’s recent resurgence simply a consequence of its smaller size exposure? 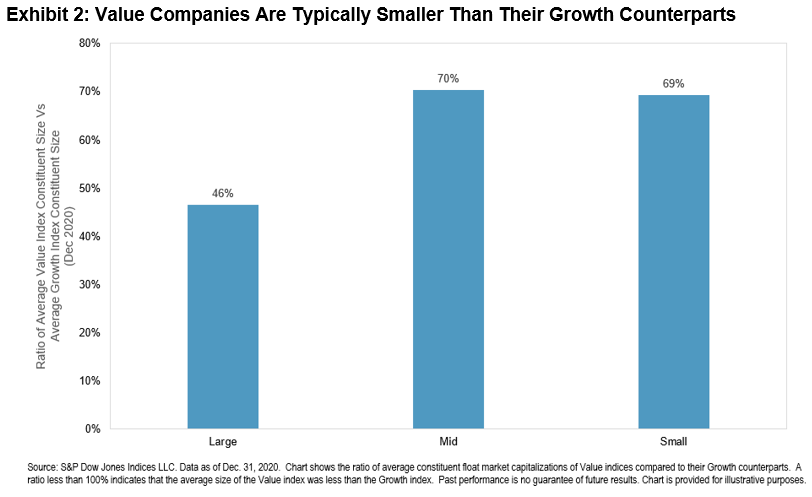 In order to analyze the role of size in explaining Value’s recent returns, S&P 500, S&P MidCap 400®, and S&P SmallCap 600® constituents are divided into quintiles based on their market capitalizations at the end of 2020. Quintile 1 contains the largest 20% of stocks (by stock count) in each size segment, while Quintile 5 contains the smallest stocks.

As a result, Value’s recent resurgence has been driven by the outperformance of more value-oriented companies rather than by their smaller size. And while we will have to wait and see what happens across the style box in the coming months, many investors may be enjoying riding the value wave for the first time in a few years.

We have previously discussed the impact of Equal Weight’s rebound on its exposure to the momentum factor. We now turn our attention to its exposure to the value factor, as the recovery in smaller caps and value stocks has been an important tailwind for the strategy. The S&P 500® Equal Weight is typically biased toward the value factor partly because of its size and anti-momentum tilts. Smaller stocks tend to have lower valuations than larger stocks; by definition, at each rebalance the Equal Weight strategy buys the underperformers, which have become less expensive, and sells the outperformers, which have become more expensive.

To understand the historical relationship between value and the performance of Equal Weight, we plot the value score spread alongside Equal Weight’s relative performance in Exhibit 2. As we noted earlier, this spread is almost always positive. Second, we observe a strong inverse relationship; as the value spread between Equal Weight and the S&P 500 widens, Equal Weight tends to underperform, as we saw during the tech bubble. Recently, the spread has decreased, coinciding with Equal Weight’s recovery. This intuitively makes sense, as large caps have become less expensive relative to smaller caps.

The current environment is situated close to decile 1, indicating that Equal Weight has become relatively more expensive compared to its cap-weighted counterpart. Interestingly, a year ago, Equal Weight was positioned at decile 8, highlighting the rapidity of the strategy’s rebound. 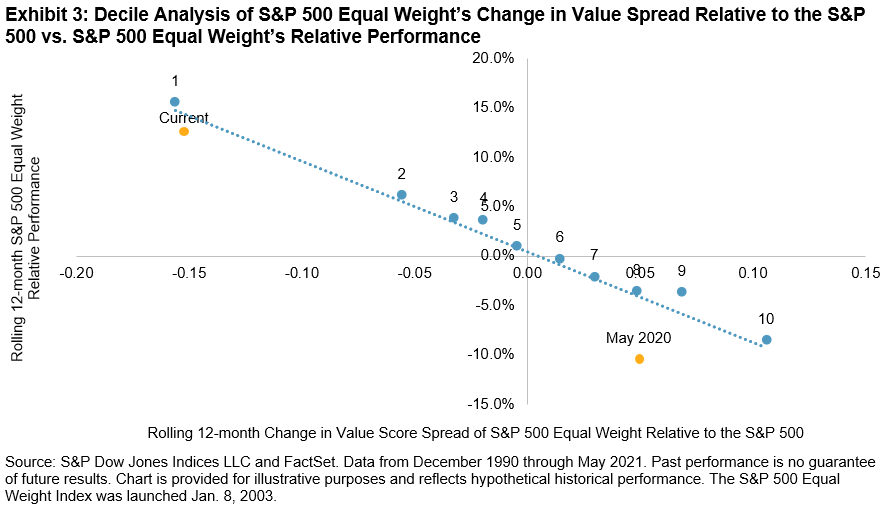 While we do not know whether the longevity of the value rally is nearing a peak or how sustainable the recovery of smaller caps is, we can look to history to provide perspective on Equal Weight’s current factor environment. If Equal Weight’s outperformance continues, we can anticipate a further decrease in its exposure to value.

“Inflation is always and everywhere a monetary phenomenon in the sense that it is and can be produced only by a more rapid increase in the quantity of money than in output.” – Milton Friedman

“If we do see what we believe is likely a transitory increase in inflation … I expect that we will be patient.” – Jerome Powell, March 4, 2021

Since the Global Financial Crisis, the U.S. Federal Reserve has actively expanded its balance sheet in an effort to keep markets functioning smoothly and help offset economic downturns. While emergency measures may have been warranted at times, the Fed’s seemingly perpetual support (see Exhibits 1 and 2) has been controversial in many quarters. 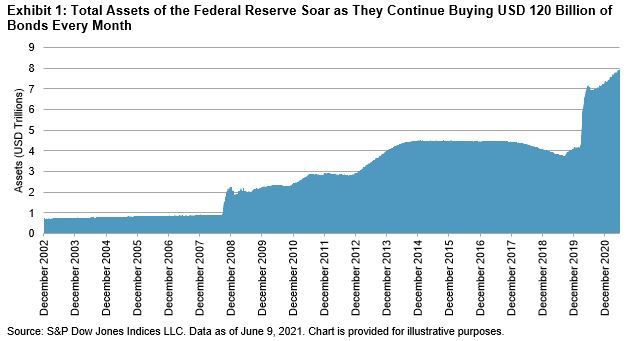 The Fed’s go-to counter argument has been that inflation remained well under control, and, in fact, for many years was below their 2% target. While there may be some dislocations in capital allocation, in general, keeping interest rates low makes credit more accessible to individuals and businesses and the lack of inflation limits harm, making easy money policies a net positive.

However, the most recent data showed a dramatic uptick in inflation, with a year-over-year Consumer Price Index (CPI) increase of 4.2% in April 2021 and 5.0% in May 2021—the highest reading since 2008. Even excluding the more volatile food and energy sectors, inflation over the previous year was 3.8% in May 2021, the highest since 1992. As previous periods of high inflation have tended to persist in the ensuing months as Exhibit 3 shows, the whispers that the Fed should begin rolling back their market interventions have become louder of late.ii

The high numbers from the past few releases were often dismissed as a “base effects” anomaly in the data. Since April 2020’s price level was artificially low due to the global shutdown at the beginning of the COVID-19 pandemic, it was merely a statistical artifact that calculating year-over-year inflation from that starting point would be so high. 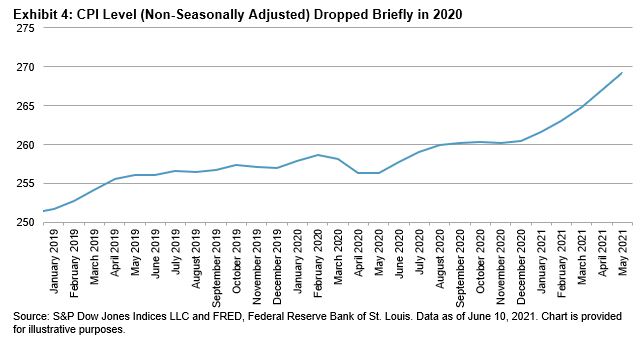 While this is technically accurate, it overlooks the month-over-month (seasonally adjusted) changes. In the past three releases, the month-over-month changes have been 0.6%, 0.8%, and 0.6%. Excluding food and energy, prices have increased 0.3%, 0.9%, and 0.7%. In other words, if the inflation target remains at 2% per year, the Fed has basically used up its annual inflation “budget” within the past three months alone. Unlike the year-over-year series, the changes over the past three months can’t be ignored as coming from an artificially low starting point.

It remains to be seen whether an alternate explanation of “transitory” will hold and the inflation of the past few months is only due to the reopening of the economy and pent-up demand. The Fed’s USD 7 trillion buying binge may yet finally overcome the disinflationary pressures of technological development, demographic changes, and globalization over the past 30 years.

i The Fed vehemently insists this was not actually quantitative easing. The purchase of short-term Treasuries every month was to offset technical dysfunctions in lending markets and not a change in monetary policy. Nonetheless, the “expand the balance sheet” solution hammer applied.

ii The Fed’s 2% target applies to a different measure of inflation, known as the Personal Consumption Expenditure (PCE). The Fed looks at headline PCE inflation over the long-term but tends to focus on core inflation (excluding food and energy) in the short-term. However, in recent years the Fed has talked up the “trimmed mean PCE inflation rate”, which excludes large movements (both positive and negative). The methodological differences between CPI and PCE do not significantly affect the macro issues presented in this post.

In part 1 of this two-part blog series, we discussed the characteristics of the S&P GSCI Dynamic Roll and the two main concerns this index attempts to alleviate, which are negative roll yield and volatility in commodities futures. Diving a bit deeper, we explore the recent performance of a diversified hypothetical portfolio when the S&P GSCI Dynamic Roll is added. Typical allocations to commodities beta range from 2%-20%. After years of commodity underperformance, most market participants’ commodities allocations are no longer at the higher end of the range, despite positive supply/demand catalysts for many individual commodities and the inflation hedging potential of commodities. The May 2021 U.S. CPI reading was +5.0%, a further surprise to the upside after a higher-than-expected 4.2% in April. Exhibit 1 shows how adding a 5% allocation of the S&P GSCI Dynamic Roll provided the same risk-adjusted performance over time but with added inflation protection. 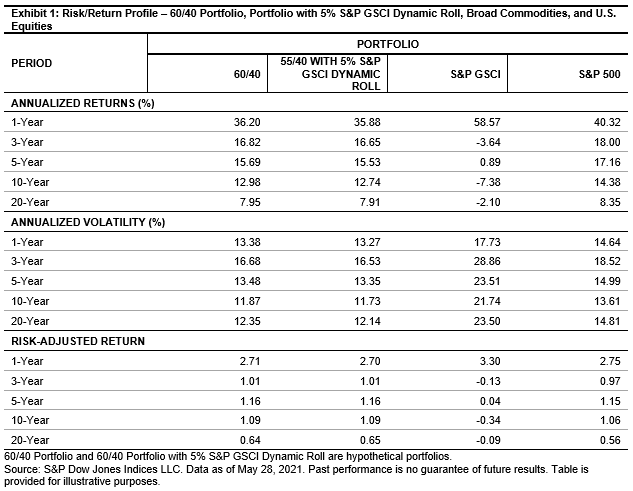 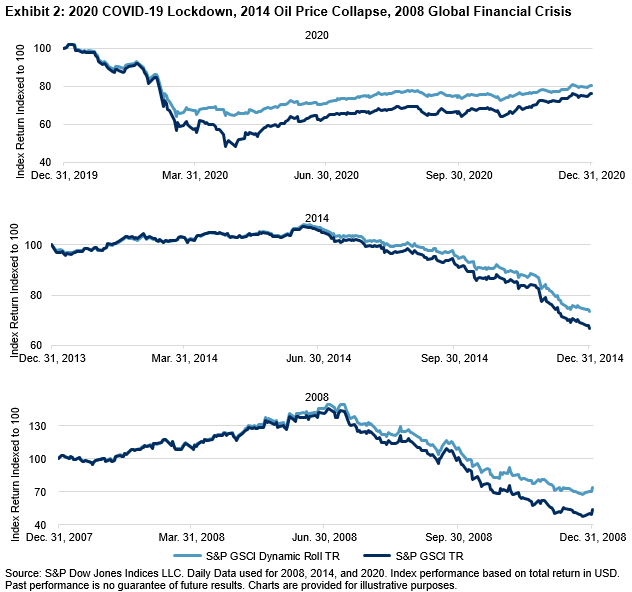 U.S. equity markets seemed to undergo a fundamental change of direction in September of last year. Exhibit 1 illustrates the shift; our growth indices, which had outperformed value handily through the end of August, have lagged ever since. The spreads between growth and value are even greater when we compute them using our Pure Growth and Pure Value indices. 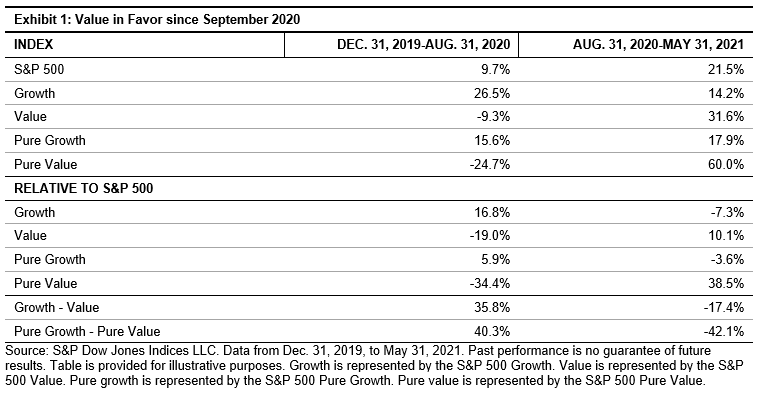 Do the strength and longevity of the value rally suggest that it must be near its peak?

To answer directly—we don’t know. Whether value continues to outperform growth or suffers a reversal is a function of numerous exogenous variables, prominently including the course of inflation, the level of interest rates, and the prospects for growth as the economy recovers from last year’s shutdowns. History does, however, let us make two observations about the nature of past value rallies.

First, as Exhibit 2 illustrates, some historical value rallies have lasted far longer than nine months. Since 1995, there have been six cycles when value outperformed growth. The shortest lasted only six months (between February and August 2009). On the opposite side of the ledger, value outperformed for more than four years between 2003 and 2007. So the nine-month duration of the current rally is meaningless in itself.

Second, when value has outperformed historically, its outperformance has accrued smoothly. Exhibit 3 illustrates this for the 2003-2007 value rally, although similar graphs could be (and have been…) drawn for the other periods of value dominance. It’s conceptually possible that, although value outperformed for more than four years, most of the outperformance occurred in the early months, with only a small dollop for latecomers. It turns out that this was not the case; early investors did not reap a disproportionate share of value’s gains. 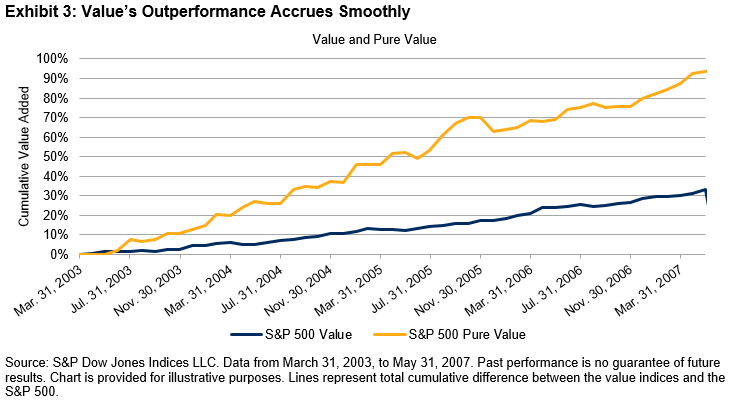 We don’t know for how much longer value will outperform growth. We don’t know what the ultimate margin of outperformance will be. But the current nine-month cycle is not remarkably long by historical standards, and if it keeps going, history gives us reason to believe that outperformance in the next period can be as good as it was initially.