This is the fourth and final in a series of blog posts relating to the launch of the S&P Long-Term Value Creation (LTVC) Global Index.

In our recent paper “Long-Termism Versus Short-Termism, Time for the Pendulum to Shift?” we discussed reasons why short-term corporate behaviors persist in developed economies.  One of the key drivers was the immense pressure that company management teams are under to deliver on earnings, especially at the expense of long-term strategic investment.  Looking at how companies in the S&P 500® were dispensing cash flow does indicate a worrisome trend: capital expenditures as a percent of operating cash flow continue to trend downward, and for 2015, it was 42% compared to its 30-year historical average of 56% (see Exhibit 1).  The decline represents a secular trend, with average capex as a percent of operating cash flow falling from 69% in the 1990s to 51% in the 2000s and 40% in the 2010s.  While technological advances and efficiencies can certainly be a factor in driving down capex investment, it seems somewhat implausible as an explanation for a 30% drop in over 20 years.

Conversely, buybacks and dividend payments together comprised 59% of operating cash flow, versus their historical average of 46%, or almost USD 990 billion in total shareholder return (see Exhibit 2).  A question arose as to how companies are funding this level of buyback and dividend activity, and a review into S&P 500 companies’ finances showed that companies have the operating cash flow resources to support these expenditures.  However, given the low-interest-rate environment, we thought it would be interesting to look at debt issuance.  New debt issued has rebounded sharply from the low in 2010 after the financial crisis; S&P 500 companies issued USD 1.8 trillion in debt in 2015, which is below the record USD 2.5 trillion issued in 2007 but also represents the highest amount issued since that period (see Exhibit 3).  Overall, corporate balance sheets are healthier and interest rates are low, but it does highlight the continuing corporate short-term behaviors taking place, whereby companies are borrowing record amounts not to invest in capital expenditures or assets that can generate future earnings, but instead to pay back shareholders today. 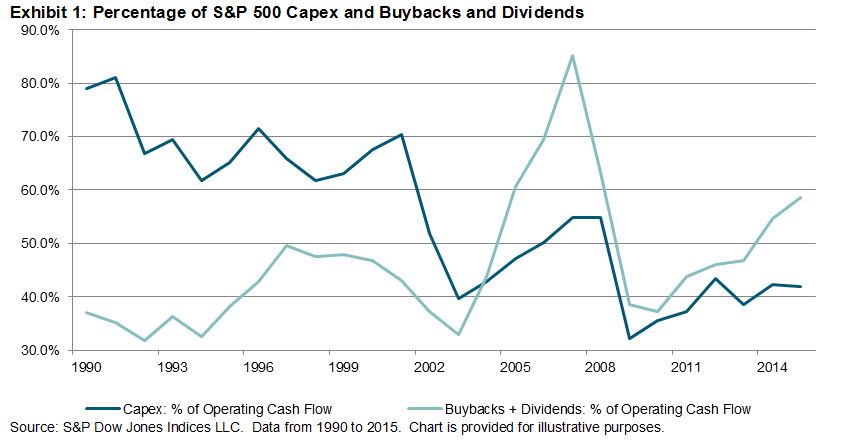 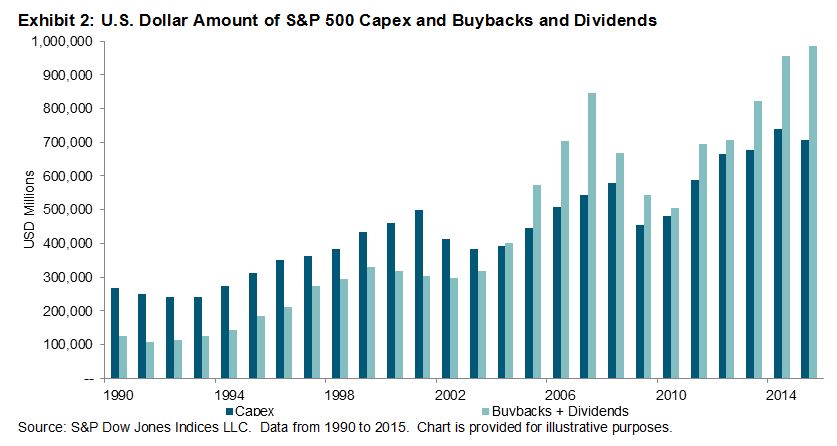 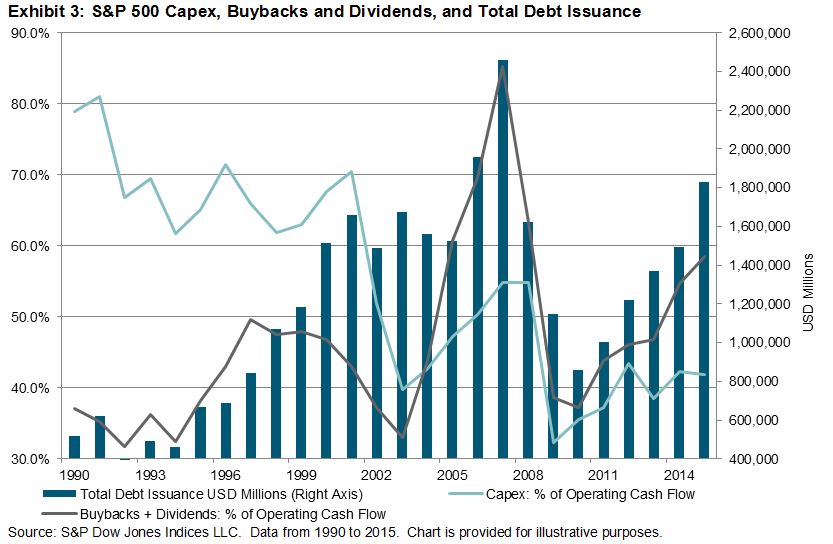 Pleasing current shareholders seems to be an overriding priority for companies, with record amounts returned to shareholders at the expense of capital investment and increased debt.  In the previously mentioned paper, we discussed the rise of the activist investors and how their growing influence has increased corporate short-termism.  In addition to the S&P Long Term Value Creation (LTVC) Global Index, S&P DJI also created the S&P U.S. Activist Interest Index, and despite the caveat that one is a global index while the other is a U.S. index, it is interesting to track the performance of these two indices over the five-year period from March 2011 to March 2016.  As shown in Exhibit 4, the results were equal as of March 2016, and yet S&P LTVC Global Index proved to be much less volatile.  Perhaps slow and steady does win the race. 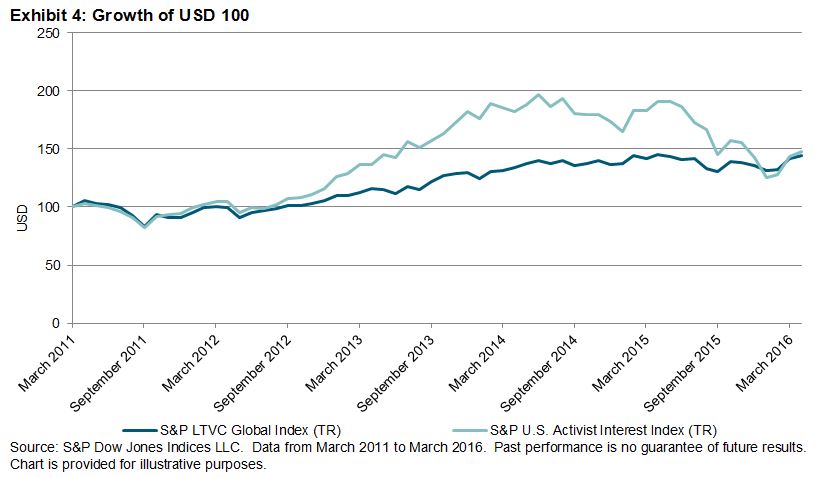