How Indexing Works in Financial Literacy

How Indexing Works in Financial Literacy

It is encouraging and inspiring to see that organizations and professional bodies are willing to roll up their sleeves and help for a good cause.  The good cause in this case is financial literacy, and the organizing body was the New York Public Library during their semi-annual Financial Planning Day on October 23rd.

McGraw Hill Financial (MHFI), the parent company of S&P Dow Jones Indices, supports the New York Public Library’s Science, Industry, and Business Library (SIBL) in their Financial Literacy campaign.  MHFI’s Corporate Responsibility and Sustainability team Co-Sponsored this event with the Financial Planning Association (FPA) of New York.  More than a dozen other organizations participated with volunteers and information for attendees.  Counselors from FPA NY, Community Service Society of NY, and the Health Insurance Information and Counseling and Assistance Program were on hand to provide advice.  MHFI was asked by the organizers to provide an information session to attendees on how indexing works.

To do that, I invited Dr. David Blitzer, Chairman of our S&P DJI Index Committees, and Todd Rosenbluth, Head of ETF and Mutual Fund Evaluation at S&P Capital IQ, to collaborate and present on this topic together.  Our approach was to combine index education from S&P DJI with fund education from S&P Capital IQ to help the audience better understand some of the investment choices they might find in everyday life such as investing with funds in an Individual Retirement Account (IRA) or through a 401K plan.  Here are some of the key points that David and Todd communicated:

The audience of 75 was interested, attentive, and asked very good questions, such as “why use an equally weighted index rather than the S&P 500?” and “Can an index keep pace with rapidly adopted innovations in an economy, or is it too passive to do that?”  David and Todd answered all questions and stayed afterwards with attendees who lined up to ask more questions.

The statement issued by the FOMC, the Fed’s policy making unit, following its meeting on Wednesday sent a clear message that the central bank expects to raise interest rates at its next sit-down in December.  Thursday morning at 8:30 AM the Bureau of Economic Analysis published the advance estimate of third quarter GDP showing a 1.5% real (inflation adjusted) annual growth rate for the economy, down by more than half from the second quarter’s 3.9% pace.  Is the Fed right to be bullish on the economy or were they as disappointed by the GDP report as most other people?

First, the FOMC’s statement: the key change was dropping the warning, “Recent global economic and financial developments may restrain economic activity somewhat and are likely to put further downward pressure on inflation in the near term” from September’s statement.  The current statement goes on to reiterate that “economic activity will expand at a moderate pace with labor market indicators continuing to move towards levels the Committee judges consistent with its dual mandate.”  Finally, the statement makes mention of raising interest rates and notes that any action will be based on both actual data and expected developments: “In determining whether it will be appropriate to raise the target range [for the Fed funds rate] its next meeting, the Committee will assess progress – both realized and expected – towards its objectives of maximum employment and two percent inflation.”

In simple terms, unless the economy is a lot worse than we think, we will raise interest rates by Christmas.

The top line GDP number looks weak, but a glance at the details shows that the Fed’s position is consistent the GDP release.   If one ignores inventories and imports and looks at the growth in real final sales of domestic product, the third quarter figure is 3.0%, down from 3.9%, a modest drop.  There were some soft spots in third quarter GDP, but nothing alarming. Personal consumption expenditures were up 3.2% at real annual rates compared to 3.6% in the second quarter, total government expenditures and investment (which excludes transfer payments like social security) slowed as did construction. Imports – which reflect buying by domestic purchasers and reduces GDP – grew faster in the third than the second quarter.  Exports grew, but less rapidly, than in the previous quarter.

All in all, the GDP report was reasonably good even if the headline was a cause for concern. In any event, it will be revised at the end of November, before the next FOMC meeting. Most revisions generate a small improvement.

The chart compares GDP growth with the growth in final sales of domestic product. The latter excludes volatile inventory moves and may give a more accurate picture of the economy.  Growth rates throughout are seasonally adjusted real annual rates.

As between the S&P 500 Bond index and the S&P/BG Cantor 7-10 US Treasury Bond Index, the former is much more correlated to the S&P 500, 0.256 versus -0.194, respectively. This is not surprising, since corporate debt carries a higher risk than Treasuries. When crisis is such a threat that corporations’ survival is at peril then naturally debt issued by corporations will also be in danger of default.

The two bond indices also had varying performance profiles in increasing and declining interest rate environments. Between 1995 and 2015, the months when Treasuries delivered their worst performance were the months when corporate bonds outperformed Treasuries by the largest spread (see table below). We divided the 249 months in this period into modified quartiles based on whether the S&P/BGCantor 7-10 Year US Treasury Bond Index was positive or negative and then further divided those months equally into the biggest and moderate changes in each direction. In the worst quartile for Treasuries, an average monthly decline of 2.04%, the S&P 500 Bond Index’s average decline was only 0.79%, an outperformance of 1.24%. In those same months, an archetypal 60/40 allocation with corporate bonds yielded outperformance of 0.49% versus one with Treasuries.

Like in recent years, Greece has yet again dominated the European headlines for most of this year.  Contagion effects have been somewhat contained, thanks to a more solid European economy and financial system.  Nevertheless, the market has experienced bouts of heightened volatility, especially in June 2015 when the Greek authorities decided to shut their banks down to stem a potential liquidity crisis in the country.

Given this backdrop, we have decided to compile data on the 10-year performance of European active managers for the first time, and here are the results.

For more information, you can access the full report via this link.

If simple is beautiful, then value investing is the equity market’s Helen of Troy – the faith that launched a thousand funds.  If a company’s assets or profits are high in relation to its share price, it does not require much imagination to suppose that such company might offer attractive long-term investment prospects.

Value is also a “smart beta,” having been indicized – the concept of overweighting companies whose stock price is relatively cheap compared to their fundamentals underlies a swathe of indices, many of which have gained a broad traction with investors.

But is “value” still working?

This is both an easy and a difficult question to answer.  First, the easy answer.  S&P Dow Jones Indices encodes value in several different U.S. based indices, reflecting the priorities of various different value investing schemes.  We can examine the performance of these various value strategies, in comparison to an appropriate benchmark, over the long and short term.  Such performance comparisons can also test the support for the various theses – such as the hope that value investments will weather crises more steadily – that are used in support of value investing as a style.  The charts below show the relative performance of four value indices based on U.S. equities, over the past year and decade. 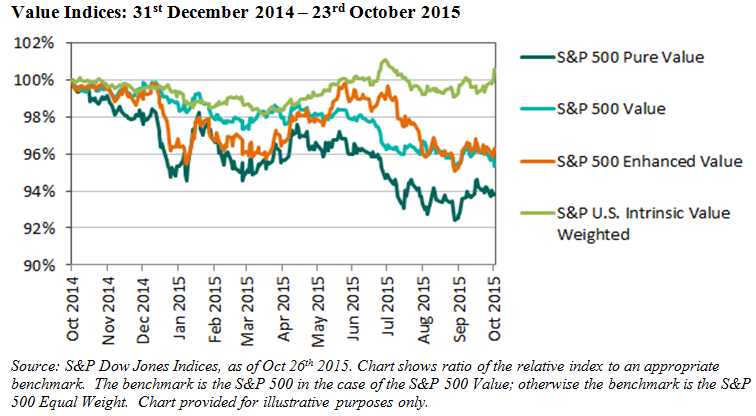 Note on reading the chart: if value is above 100%, the relevant index has outperformed its benchmark by a proportion equal to the chart level since the start date – if below, it has underperformed by that proportion.  And note that the benchmarks for relative performance vary among value indices; as we’ve indicated previously in our research on value indices, an equal weight benchmark is a better indication of the value-added by the particular index methodology. 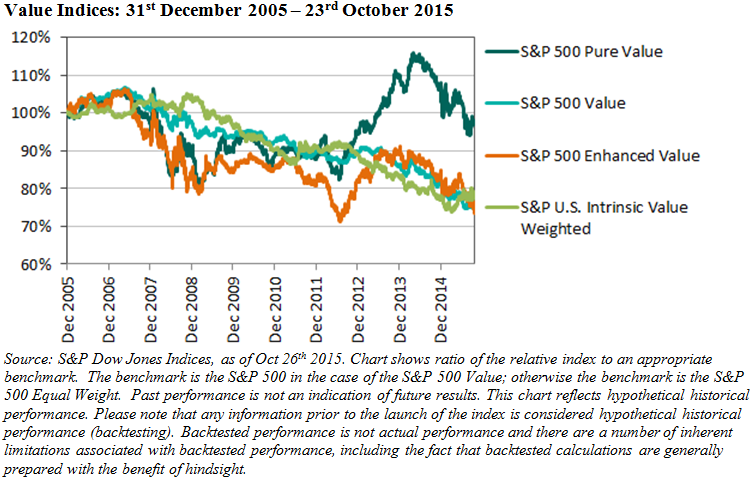 The result of such comparisons is conclusive: in both the short-term and long-term, value indices have been underperforming.

Of course, the harder question is whether value will “work” in the future.  Value investing is typically supported, at the last, with the historical fact that – in the long, long term – value investing has outperformed.  But there is always a disclaimer that the future may not reflect the past, and there is something different this time.

This difference is hinted already by the existence of our value indices: as a concept, value has become remarkably popular in recent times.  A vast bank of academic literature has been published on the subject; systematic strategies have been encoded and funded to capture it.  To give a sense of this growing popularity, the next chart shows the assets outstanding in U.S. listed ETFs that have the word “value” somewhere in their name; the growth in assets outpaces the investment growth (as proxied by the S&P 500 Value Index) by a close to a ten times multiple. 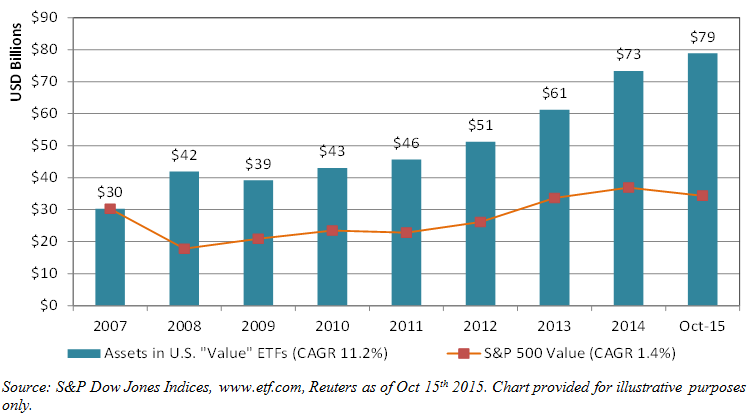 With so much energy directed to exploiting the excess returns available through value investing, maybe the only “value” stocks left are the value traps, those stocks whose prices are low as their prospects are determinedly poor.  And, if the popularity of value strategies increases sufficiently to diminish future returns, investors may be better served focusing on other factors.

Like the topless towers of Ilium, investors can be burned by relying on the wrong factors.   It remains to be seen whether the returns over previous decades attributed to a “value” premium are due a comeback.  More broadly, the persistence of excess returns attributable to the kind of simple strategies that can be indicized – like value – are not guaranteed; careful analysis of persistence is a matter of great importance.