Don't just do something, sit there.

S&P 500 Industrials have easily set a sixth consecutive quarterly record for cash and equivalent on hand (under current assets, mark-to-market), sitting on what amounts to 94 weeks of net earnings (latest 12 months). The $1.3 trillion is not making much as it sits in short-term investments or banks, regardless of its U.S. or foreign domain. The cash is however getting a lot of attention, especially from activist investors, who see the pot of gold at the end of a short rainbow.
The How is easy, the Why is not.
For 2013, earnings (with a supporting hand from higher margins) and cash-flow both set a new record. However, it’s not always what you make, but what you spend. And while dividends and capital expenditures also posted new record highs, and buybacks increased 30%, income was stronger. Dividends, while at record levels, are only 36% of income (historically they are 52%), and Capital Expenditures appear (my review is not complete yet) to be more about maintenance and production increases than new plants and expansion. So cash keeps going up, as does the actions by those attracted to it.
The Why is ‘why aren’t companies spending more’, which is not as quantifiable. Sales, which only increased 2% in the S&P 500 last year, remain the main concern, and to some degree is the main reason. No company is going to produce 110 widgets when they only think they can sell 100 (regardless of tax credits or incentives; there are 60 credit items on the Senate table in April), with the key word here (in my opinion) being ‘think’. Confidence in the economy has grown, as the economy has demonstrated its ability to ride through tough times (recession, budgets, deficits, sequester, government shut-downs and the weather) and still produce growth. However, growth in leadership still (to me) appears to be a bit lacking. There are some signs that spending is increasing, and along with it some corporate commitment. However, ‘some’ will be slow, and while slow and steady has worked for the stock market for the last year-and-half, I’m not as certain about the steady when it comes to the economy.
Regardless, cash is enormous, with enough money for companies to do whatever they want. And when they start spending it – that is where you want to be.

Later this week when Google’s class C shares begin trading there will be 500 companies but 501 different ticker symbols and stocks in the S&P 500.  And beginning September 15, 2015, companies in the 500 which have multiple share classes will have all their liquid classes included.  The weight of each company will represent the total float available to shareholders, just as it does today.

Multiple share classes are becoming more common in the US, especially among technology companies.  The usual reason is either super-voting stock (shares with more than one vote) or non-voting stock to insulate management from takeovers or activist investors.  S&P Dow Jones Indices has included multiple share classes in some foreign indices covering markets where they are common. The increasing use in the US, as highlighted by Google’s new class C shares which begin trading this week, led to a review of the index methodology for the S&P 500 and our other US indices.  Under the current methodology, S&P DJI identifies the most liquid class and then increases its share count to account for all classes.  This approach works well when the less liquid class is small so the increase to the share count of the liquid class is also small. However, when the excluded class is as large as the included class – as is the case with Google classes A or C – the increase in the share count can be large enough to raise concerns about liquidity.  Likewise, in sector or strategy indices with fewer stocks and larger weights on each stock, increasing share counts to adjust for less liquid classes could affect liquidity.

While the shift for Google’s new class C is being done now, the shift to multiple share classes for other companies in the S&P 500 (and the S&P 100, S&P 400, and S&P 600) will be done in September 2015. (yes – 2015).  This will involve several stocks and both advance planning and advance notice to market is important.

Starting on April 3rd, the S&P 500 will still have 500 companies, but there will be 501 stocks.  The “extra” stock will be Google class C with no votes and Google’s current ticker symbol GOOG. Google class A with one vote will get a new ticker, GOOGL.  The tickers are set by NASDAQ and Google.  Google class B shares which have 10 votes per share are closely held by management and don’t trade. Since the class B doesn’t trade, it is not in the S&P 500.

2013 was the blockbuster year for equity as the domestic equity markets posted double-digits returns.  In a year marked by record breaking gains, it is particularly important to measure the relative performance of active funds versus the indices as bull markets often present challenging conditions for active managers to overcome. The 2013 year-end SPIVA report findings confirm that while active managers may do very well on an absolute basis, the majority of them can end up underperforming on a relative basis, at times by narrow margins.

Looking at the large cap space, the S&P 500 returned 32.39% for the year while the median quartile breakpoint for the large cap core category is 31.92%.  This slim spread of 47 basis point difference in returns is reflected in the underperformance of large cap core funds against the benchmark by a narrow majority (57.74%).

Small cap space, however, tells a different story.  The S&P SmallCap 600 had its best year since the launch in 1994, posting 41.31%.  The first quartile breakpoint of 40.85% for small cap core active funds indicates that a quarter of the funds were able to outperform the benchmark on a relative basis, albeit by a narrow margin of 0.46%.

Mid cap space is the only category in which the active managers fared well against the benchmark in 2013.  The S&P MidCap 400 Index gained 33.5% for the year.  The median mid cap core manager posted 34.91%, highlighting that the majority of the active mid cap managers were able to beat the benchmark by a good margin.

Over a longer-term investment horizon, even an underperformance or outperformance by a small return margin in one year can translate into a meaningful difference as compounding kicks in.  When viewed over the five-year horizon, active managers across all market cap segments and style underperformed their respective benchmarks.

Exhibit 2:  One and Five-Year Quartile Breakpoints of U.S Equity Funds

Companies continue to increase their shareholders’ returns through buybacks and cash dividends. These two expenditures, combined, reached $214.4 billion in the fourth quarter – the second highest level (Q3 2007 holds the record at $233.2 billion) and three times the Q2 2009 Bear market level ($71.8 billion). Helping companies do this are record earnings, record cash-flow and record cash reserves; pushing companies are activist investors and the growing concern within board room over outside holders ‘coming in’.
While dividend payments are historical high, the payout rate remains low, with dividends being 36% of As Reported earnings compared to an historical 52% (from 1936).
Buybacks need to be measured against issuance, and for Q4 more companies decreased their diluted share count, even as purchases slowed.
I expect this trend of greater shareholder return to continue throughout 2014 (ain’t no bodies opinion but my own).
—————————————————–

Information Technology maintained its dominance of buybacks, accounting for 26.7% of all buybacks in Q4,’13, up from 25.9% in Q3
Materials and Utilities (a minor player) significantly increased their buybacks in Q4,’13 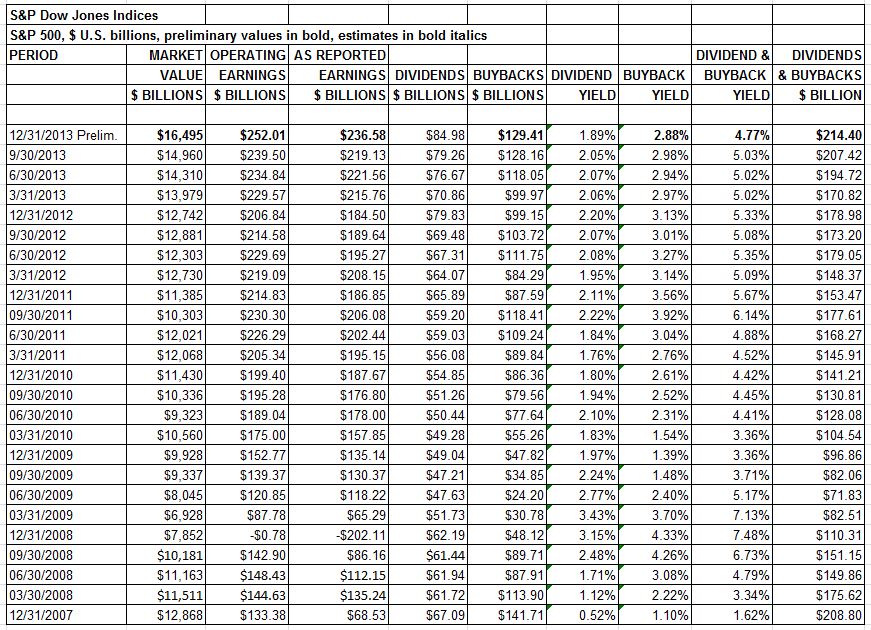 Don't just do something, sit there.

At the beginning of this year, we suggested that 2013 might well have been a another tough year for active managers. Judging from the response received at the time, this expectation was somewhat controversial: the more common refrain was to point to falling correlations during 2013 and predict a return to “stock-pickers’ market.” In such an environment, the reasoning goes, it pays to be more active with your investments.

Our regular SPIVA® scorecard regularly reports on the relative performance of active managers, and the full-year 2013 results are in. Last year, roughly 45% of U.S. large-cap funds achieved the distinction of outperforming the S&P 500® – a touch up from the previous year, but still a strong validation for passive investors.

Source: S&P Dow Jones Indices Data for 2007 are to March end; all other years are full calendar years. Charts are provided for illustrative purposes. Past performance is no guarantee of future results.

Moreover, it seems our forecasts regarding 2013 were correct in a second respect. Based on our research on dispersion, we expected to see a relatively narrow spread between the best and the worst managers (again, despite falling correlations). The data show that for large-cap core U.S. equity funds (the subject of our original research), 2013’s interquartile range between the best and worst performers was indeed fairly low, and continues to be well-paralleled by dispersion.

Source: S&P Dow Jones Indices Data for 2007 are to March end; all other years are full calendar years. Charts are provided for illustrative purposes. Past performance is no guarantee of future results.

While it remains unclear whether the choppy markets of 2014 will provide a more conducive environment for active managers, those who wish to leaven their analysis with the latest values of dispersion may be interested in reading our ongoing commentary.