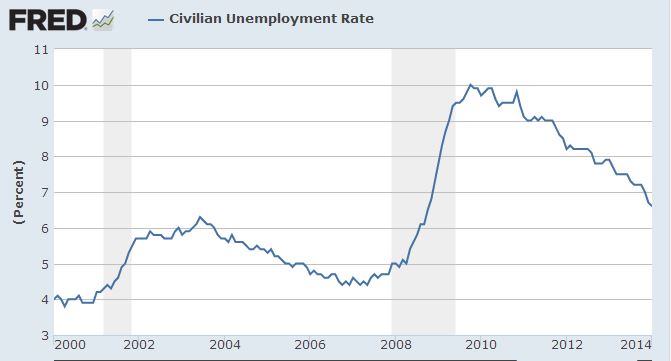 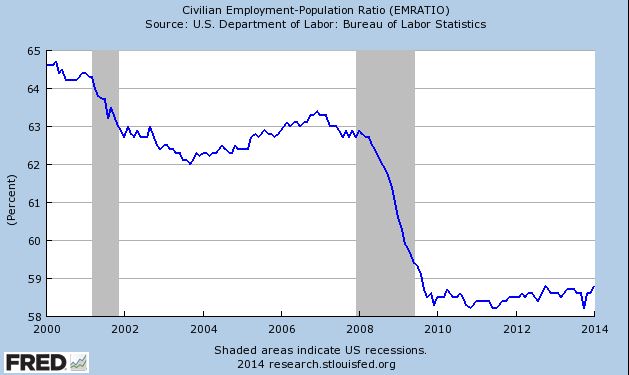 In honor of the Chinese New Year, 2014 – Green Wood Horse (馬 午), CCTV interviewed me on lumber.  As for other commodities, The Year of The Horse should be prosperous for lumber, especially for China’s sawmill industry, enabling them to support their construction boom by importing whole logs and sawing them into lumber at a cheaper price than buying the already sawn lumber.

In case you are interested, here is the script:

Also, I’ve included a number of links you might find useful on lumber:

Two carefully watched numbers are the earnings per share (EPS) and the price-earnings ratio (PE) on the S&P 500.  Their popularity stems from the wide spread use of the index and its long data history.  EPS is the market analysts’ gauge corporate profits in the US while the PE is their measure of value.  While there is a lot of debate over what level of PE is so high one shouldn’t but or so low one should rush into the market, most analysts agree it is a key valuation measure. 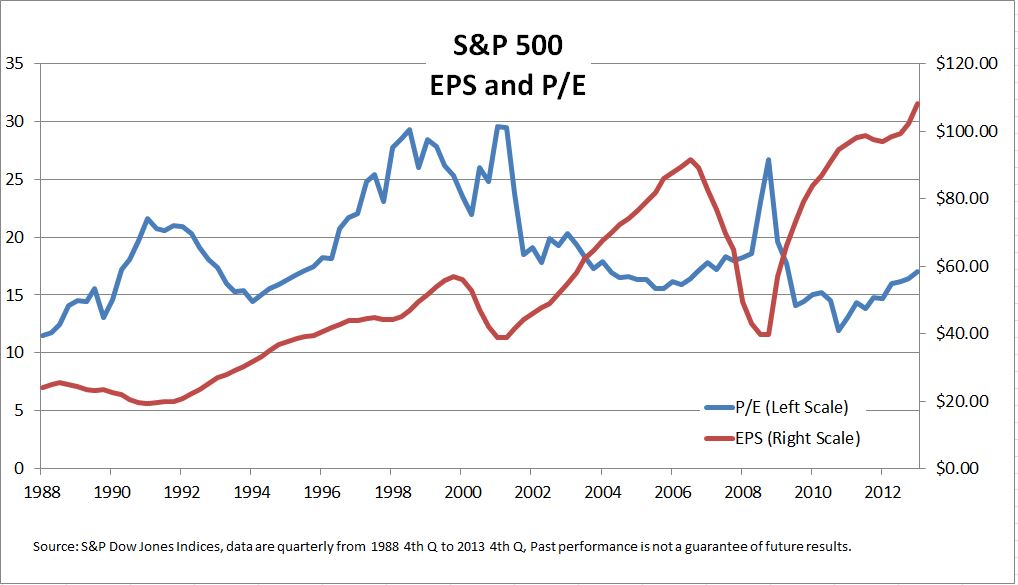 The PE is the ratio of the price of the index to the earnings per share.  The index price, say 1848, can be thought as the price of one “share” of the S&P 500 and the EPS, about $108.00 is the earnings of the companies represented by that share of the index.  There are a few ways to measure the PE, depending on how earnings are measured. Most of the time people use a full year measure instead of one quarter’s earnings because there are seasonal shifts in earnings for some industries.  The key question is whether to measure earnings by the last four quarters of data based on company reports or to be forward looking and measure earnings by analysts’ estimates for the coming year.  While market prices depend in part of people’s expectations of the future, using the recent history – usually called “trailing earnings” —  means using real numbers rather than forecasts. Since earnings usually rise, the PE based on trialing earnings is likely to be a higher number than the PE based on analysts’ estimates of next year’s results.

Calculating the earnings per share for the index is a bit more complicated than the PE. It follows the same approach used to calculate the index itself: the market value of each of the 500 companies is added together giving a total is about $15 trillion today. Then to have a more manageable number for the index level, the $15 trillion is divided by a scale factor called the divisor.  One can think of the divisor as if it were the number of shares outstanding of a company: a company’s stock price is its total market value divided by the number of shares. Likewise, a company’s EPS is its total earnings divided by the number of shares.  The analogy is that the EPS for the S&P 500 is total earnings of the 500 companies, divided by the same divisor used to calculate the index.

The EPS calculation includes earnings of all the companies in the index, including any that lost money.  Counting only positive profits and skipping losses might make for nicer numbers, but it would be market analysis through rose colored glasses. The chart shows both the PE and the EPS for the S&P 500 going back to 1988. The bear markets in 2000-2002 and 2007-2009 stand out: earnings fell sharply.  On both occasions, the PE rose because the proportional drop in earnings was greater than the decline in stock prices.

Neither the PE nor the EPS are infallible guides to the stock market, but both are important measures of how the market is doing.

With all of the monetary policy including the unprecedented quantitative easing, the impacts have been different than expected. Assets became hyper correlated, the dollar didn’t drop relative to other currencies and inflation never showed up.

Recently, I had the privilege to sit down with Bluford Putnam, Managing Director and Chief Economist, of our partner, CME Group, to discuss why inflation is likely to appear this year.

Historically, there has been a high correlation between year-over-year changes of the Consumer Price Index or CPI and commodity indices.  This is since they contain many of the same components like food and energy, and the commodity indices reflect our changing expectation of future prices through the futures contracts.  Also, because food and energy are major components of the CPI and are among the most volatile of inflation, they are key drivers of the indices.  Over the past 10 years, the S&P GSCI has had a correlation of 0.74 to CPI and DJ-UBS has had a correlation of 0.64, where more energy has provided a higher correlation.

Further since food and energy typically represent a higher percentage of commodity indices than of the CPI, one dollar of investment in a commodity index will provide a basis for more than one dollar’s worth of inflation protection. In this chart, the inflation beta can be interpreted as a 1% increase in inflation results in 10.3% increase in return of the DJ-UBS  during the period from 1992 through 2013. Notice the  S&P GSCI  has had the highest inflation beta that is likely due to its world production weighting scheme that yields a higher energy weight.

If we look at the super accommodative monetary policy including zero interest rates and quantitative easing, it really hasn’t worked at all.  The U.S. economy has been chugging along at about 2% GDP and we really haven’t seen any signs of inflation, just about 1% core. It is because of the kind of recession we’ve had that requires consumers, corporations, and governments to shrink or delever since they took too much debt.  During the deleveraging process the interest rates don’t matter much – or like John Maynard Keynes said, “it’s like pushing on a string.”

Now that the deleveraging seems to be ending, the US economy has come back nicely, despite the four years it took.  Consumers are borrowing again, though at more appropriate levels for their incomes, corporation have tremendous amounts of cash and are fine, and state and local governments which took a longer time to balance have stopped cutting jobs.

So, the right policy at the Fed should start working about now given inflation should be kicking in this year. Generally it takes about 18-24 months for inflation to start after the clock starts ticking, which Blu says happened around Dec 2012.  However, if there is no FX feedback (and there is none now, since the USD is doing OK), the time lag might take longer or the inflation pressure might be little more muted than otherwise.

How will the Fed respond?  Not clear, but if you accept the Fed’s guidance, they want to be “behind” the inflation curve and let it get started. What this means is that given their dual mandate of encouraging full employment and maintaining price stability, which is defined by them as 2% core inflation rate (that is minus food and energy), the Fed is likely to wait until inflation hits at least 2.5% until they act.

Although, it is not just about when the data gets there. The Fed needs to feel like market expectations are rising and at that point they will probably start raising fed funds rates from its near zero level at slow increments of about 25 basis points per quarter.  According to Blu, they may do this until they get to about near or even 1% above the inflation rate.

The European Central Bank left its key rate unchanged at a record low of 0.25%.

There was speculation around whether the European Central Bank would cut rates again in response to the low level of inflation (0.7% in January). The central bank’s president, Mario Draghi, addressed the low inflation issue by saying that the measure of inflation would remain low over the upcoming months, but he would expect it to eventually rise back to the central bank’s target rate of just under 2%. Further, he was adamant that there is no deflation in Europe. He continued by explaining how the situation in Europe is not similar to Japan’s deflationary period, touching upon the finer points of Europe’s inflation and describing how the European economic recovery is advancing.

Year-to-date, the S&P Eurozone Sovereign Bond Index is returning 2.44%, just about the 2.46% it returned for all of 2013. Hidden within the broader index though is a number of country stories. Because this is a market weighted index, the return of the index will look more like its larger constituents (aka: Italy, France and Germany). Though if you were to look at the performance of each of the individual countries, it is quite evident that investors have regained confidence in the credit worthiness of the once troubled countries such as Ireland, Italy, Portugal, Slovenia and Spain. 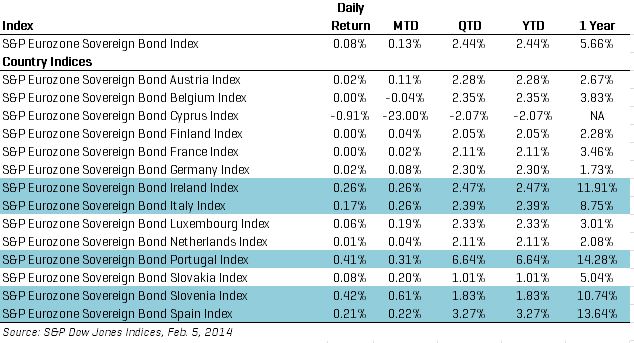